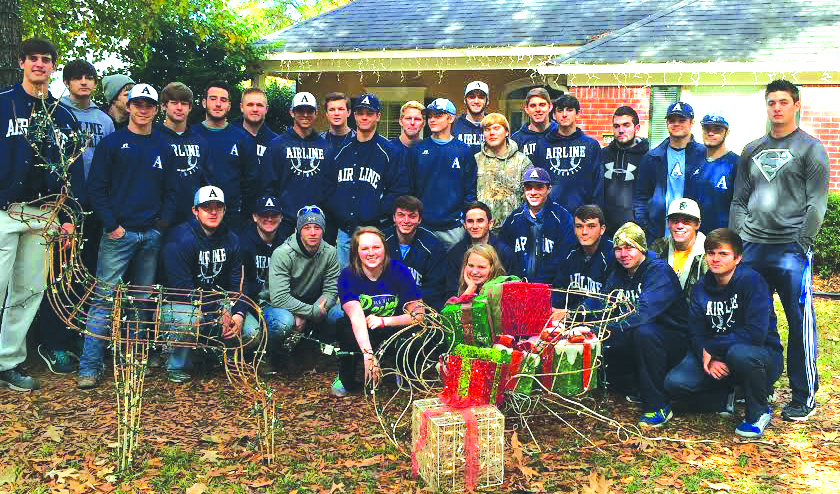 A holiday tradition is proving to be more meaningful for one Bossier City family as each year passes.

The idea to decorate his home came when Jason was hospitalized right before Thanksgiving in 2009. Head baseball coach Toby Todd asked Jason’s wife, Jennifer Bland, if there was anything he could do to help the family while he was away.

“I said no, everything is fine,” Jennifer said.

However, there was something Coach Todd could do for the Bland family.

“Jason loved his Christmas lights. Some of the coaches even called him Griswold,” Jennifer said, referring to the character in the National Lampoon movie series. “It was too much for me to do all by myself.”

Todd didn’t want Jason’s daughters, Caroline and Hannah, to have a Christmas they weren’t used to. He rallied the baseball team together and decided they would decorate the Bland’s house.

The team, coaches and a few parents showed up and took care of all the lights and decorations. Jennifer went back to the hospital and told Jason what the team had done for them, showing him pictures and videos of the team working on his home.

Jennifer said “he thought it was awesome.”

Sadly, Jason Bland passed away June 7, 2010. Jennifer said she stayed in touch with Coach Todd and the Airline coaching staff after his death, but a familiar conversation arose the week of Thanksgiving.

“He called and said we’re coming over to put up your Christmas lights,” Jennifer said. “Of course I started crying.”

“It starts our holiday off,” Jennifer said. “It gives us something to look forward to.”

But what would Jason say about this tradition?

Coach Todd said Jason’s death had a huge impact on his coaching staff.

“Players come and go, but this staff was a group that had been together for many years,” he said. “He was a jovial man, rarely ever angry and he worked great with the players. It’s unfortunate that none of the players today ever got the chance to work with him, but they will never forget him because of this [tradition].”

Senior outfielder Peyton Coker was a ball boy when Jason was still alive, but he didn’t get to spend much time with him. However, he is proud to carry on his legacy through this service.

“This is an incredible opportunity for us to serve a family that served us so diligently,” Coker said.

Tanner Daniel, a senior middle infielder, agreed, adding that it’s a “big deal” to see the family happy during the holidays.

Jacob James, a senior outfielder, said decorating the Bland’s house is something he looks forward to every year. Not only does it serve as a bonding time for the team, but James said it’s about doing a service to the community.

That’s what Todd wants his team to always remember.

“The lesson of the game serves a bigger purpose,” he said. “This means a lot to us because baseball isn’t just about winning games. [Jason] wasn’t a man of many words, but when he spoke he meant it. I think this would really make him smile.”

Jennifer said this is one holiday tradition she will cherish and appreciate for years to come.

“I tell [Coach Todd] this every year – there aren’t enough words in the English language that can describe or tell you exactly how much it means to me and the girls for them to do this. There aren’t enough ways to say thank you or ways to show appreciation to let them know how we feel about it. This is something that’s very special to us.”