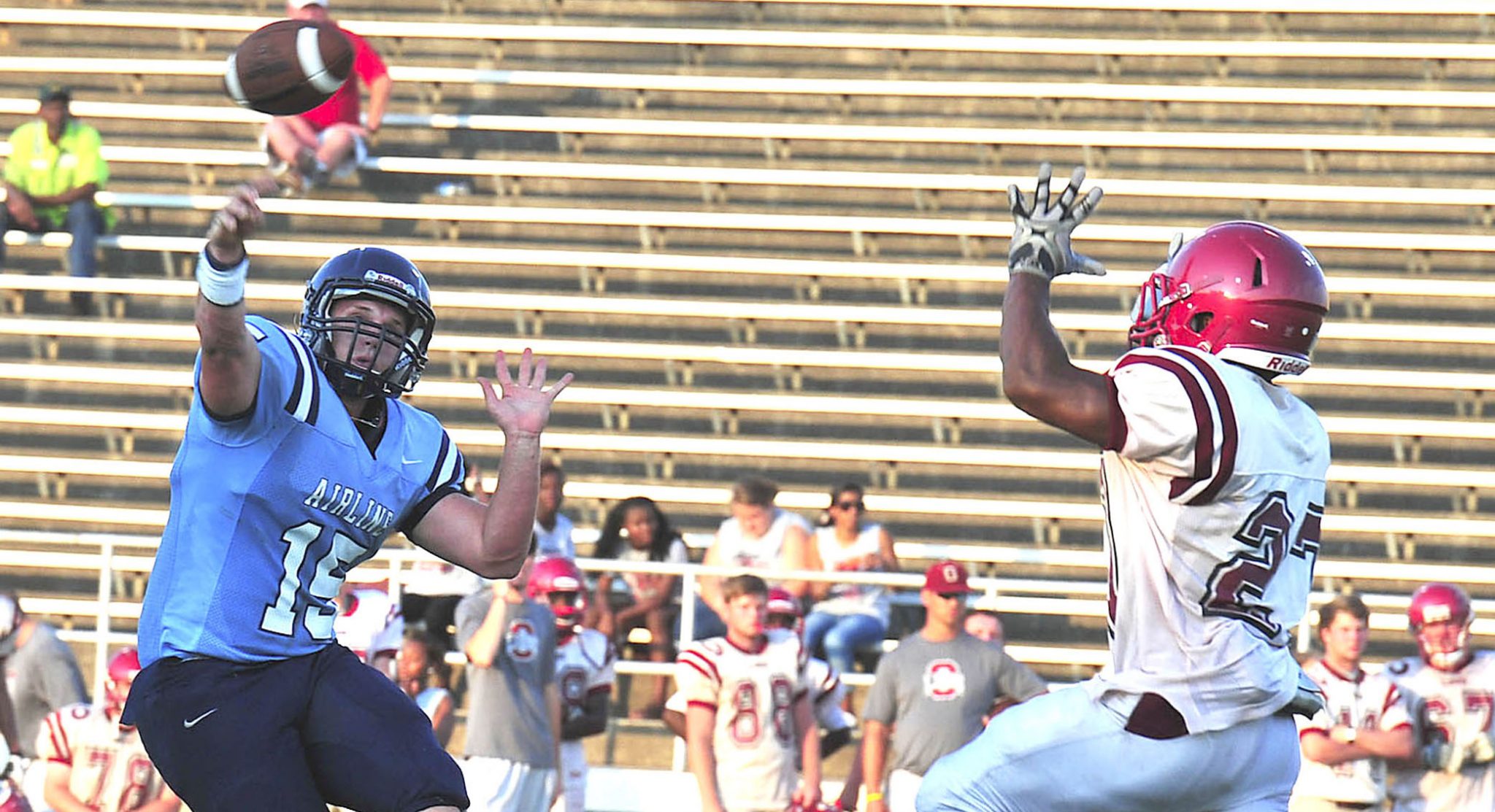 In the New Orleans Times-Picayune’s preseason countdown of the top 50 teams in the state regardless of class, the Airline Vikings were ranked No. 28 and the Ouachita Lions were No. 5

Based on Friday night’s scrimmage between the two teams at Airline, there’s not a whole lot of difference between No. 28 and No. 5.

The schools’ first teams played to a virtual draw. The scrimmage concluded with a regulation 12-minute quarter that ended in a 0-0 tie.

“The kids played hard,” Airline third-year coach Bo Meeks said. “What we wanted to see is how physical are we going to be? We know we’ve got to run the football offensively, and for the most part we did a pretty good job.

Before the regulation quarter, there were two sets of plays where each team’s first-team offense got the ball for 10 minutes. Each team started at its 30, and failure to get a first down resulted in the ball being brought back there.

Airline’s defense turned in a strong performance. Except for a couple of plays, Ouachita had very little success running the ball during any portion of the scrimmage.

In fact, Airline held the Lions to negative yardage on two straight possessions.

The Airline offense, which features nine new starters, advanced to the Ouachita 7 and 16 in the early portion of the scrimmage but couldn’t score.

The Vikings also made a couple of forays into Ouachita territory in the regulation period.

The only touchdowns came in the “red zone” segment where each team got the ball at the opponents’ 20.

LJ Strachan had a couple of nice runs for the Vikings. D’Juan Byrd, Deangelo Pouncy and Kavonte Johnson had receptions.

“I think we can do a better job of making the routine plays on offense,” Meeks said. “We punch a couple of those in and it’s a different feeling at the end of the night. But we’re really pleased with our progress.”

Benton-Green Oaks: Benton first-year coach Reynolds Moore was generally pleased with what he saw from his squad.

The Tigers scored twice during a 15-minute period which concluded the scrimmage.

The Tigers have a lot of experienced players returning on defense, and Moore said it showed.

“I think our defense played really, really well,” he said. “They gave up one big play is what it boiled down to. Other than that they played lights out.”

Moore has spent the offseason installing the spread offense.

“I think there were a lot of bright spots,” he said. “We dropped a lot of passes, though. That’s got to change. We did a good job with the tempo. I thought we moved the ball fast when we wanted to.”

Moore was especially pleased with the way his offense executed at the end of the 15-minute period with a 40-yard drive capped by Shaffer’s touchdown as time ran out.

“I thought we got a lot out of it,” he said. “Obviously, there are some things we’ll see on film that we’ve got to work on and get better at.”

Benton had a lot of success with its goalline offense, scoring “four or five times,” Moore said.

Moore was also pleased with the way Shaffer handled the offense.

“He made some good reads and did a real good job of tucking the ball and getting what he could when pressure came,” he said. “There are a few things I want him to work as far as techniques with his escapes sometimes when he faces the pressure. But he did a good job of seeing things before they happen and kind of knowing where the ball was going. I was pleased with his progress.”

Bossier-Red River: The Bearkats have a lot of new faces on both sides of the ball and they got some solid performances from many of them in Coushatta Friday.

Chris Hall scored on a 65-yard run and finished with about 150 yards on the ground.

Isaiah McKinsey, an All-District 1-3A linebacker last season, scored on a 25-yard run up the middle.

“It went OK,” Bossier coach Michael Concilio said. “We had some good areas and a lot of areas that have to be worked on.”

Concilio liked the aggressive play of his defense.

“I was impressed with how were were flying to the football,” he said.

Hall and McKinsey are both fullbacks. Concilio said they got the bulk of the carries because the Bearkats found an area they could exploit in the Red River defense.

Concilio said his starting lineup isn’t set in stone yet with personnel changes possible in the backfield and offensive line.

Friday’s jamboree could determine those changes.