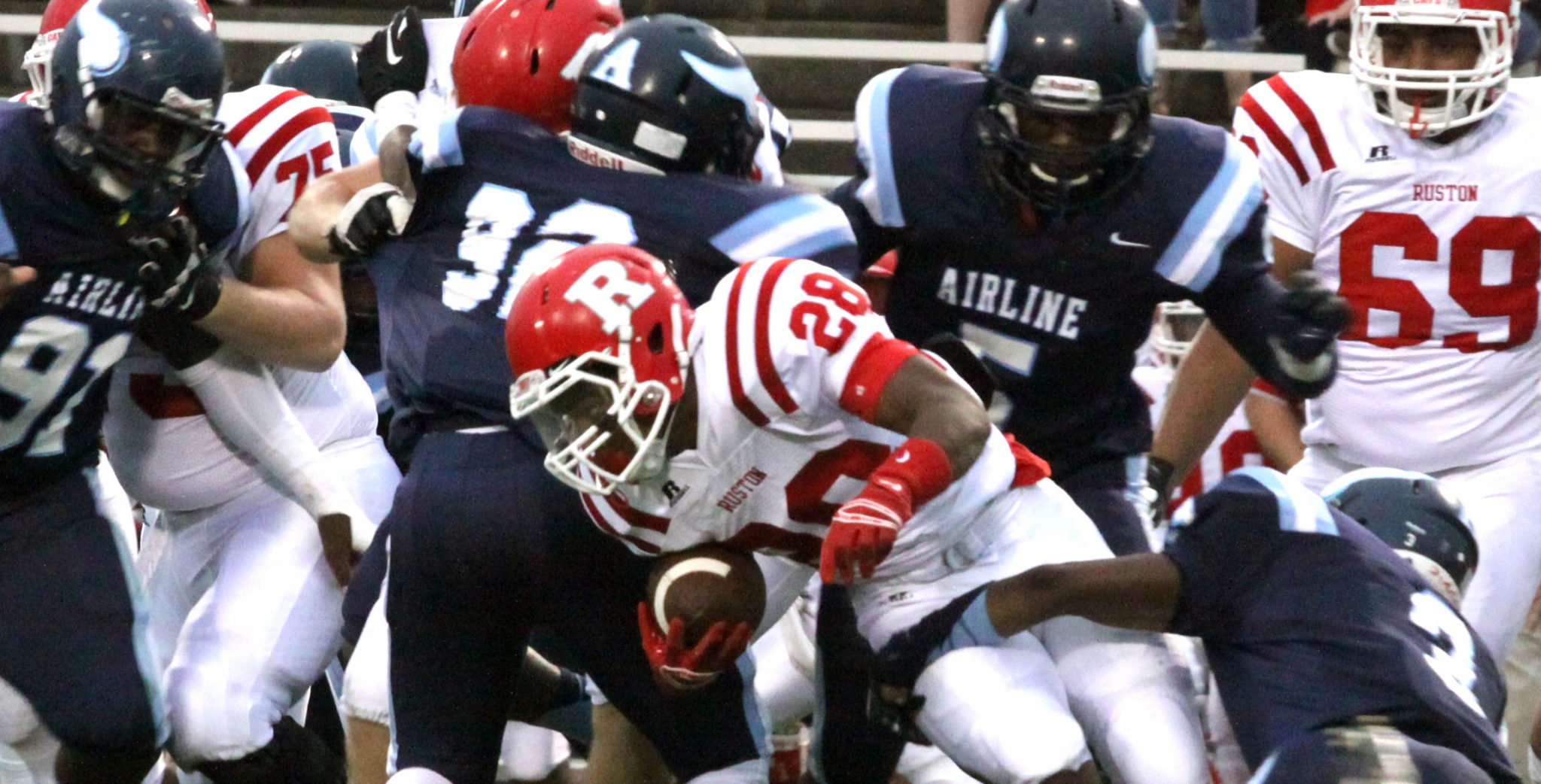 Last week, I predicted on Twitter that the Parkway Panthers would come back strong after their season-opening loss to Calvary Baptist.
Turned out I was right about that. The Panthers rolled to a 45-21 victory over the Marshall Mavericks in the Landers Battle of the Border Saturday at Independence Stadium.
This Friday, I’m looking for the same from the Airline Vikings when they host the Franklin Parish Patriots in their homecoming game.
Airline suffered as tough a loss as they come last Friday, 12-7, against Ruston, Vikings coach Bo Meeks alma mater. Airline looked like the better team most of the game. The defense couldn’t have played much better.
But when they had the chance to put the Bearcats in a big hole in the first half, the Vikings couldn’t do it. Three drives inside the Ruston 30, including one that reached the 10, ended in no points.
Quarterback is one of the toughest positions to play at any level of football. It’s especially tough in the spread offenses used by many teams, including Airline, these days.
And if you’re a sophomore starting your second game, it’s a huge challenge. No doubt Airline sophomore quarterback Noah Hildebrand had a rough game against Ruston with five interceptions, including a Pick Six that gave the Bearcats the lead in the fourth quarter.
But he made some good decisions, too, like throwing the ball out of bounds at times rolling out under heavy pressure. He also completed a swing pass to Shuncee Thomas that set up the Vikings’ lone TD and made a nice, scrambling run in the first half.
Hildebrand needs only to look at Parkway quarterback Keondre Wudtee to see how things can change from one week to the next.
Wudtee threw four interceptions, including a Pick Six, and lost two fumbles in the loss to Calvary. On Saturday, he threw another Pick Six early against Marshall. But he finished 15 of 18 for 289 yards and a touchdown. He also scored two TDs on short runs.
Wudtee and the Panthers will look to keep it going Friday when they host Arkansas High. This will be the teams’ first meeting. They were scheduled to play last year in Texarkana, but the game was cancelled because of heavy rain.
Arkansas High hasn’t enjoyed a lot of success in recent years, but the Razorbacks are off to a 2-0 start that includes their first win over rival Texas High in 13 years in the season opener.
I just don’t see the Razorbacks slowing down Parkway’s offense very much, though.
Elsewhere Friday, the Haughton Buccaneers (2-0) host the Minden Crimson Tide (1-1) and the Plain Dealing Lions (2-0) host the Benton Tigers (1-1). On Thursday, Bossier (0-2) travels to Northwood’s Jerry Burton Memorial Stadium to face the Falcons (1-1).
Haughton coach Rodney Guin wasn’t pleased with his team’s performance on offense in last week’s 22-2 win over Benton. Louisiana Tech commit Javonte Woodard had a big day, though, with eight catches for 170 yards and two TDs.
Guin couldn’t have been more pleased with the play of his defense. That defense could get a big test against Minden, which has shown the ability to run the ball. The Tide piled up 52 points in a win over Bolton last week.
I expect the Bucs offense to be better this week and for Haughton to go to 3-0.
The Plain Dealing-Benton matchup is an interesting one. Realistically, no Class 1A team, with the exception of Haynesville and maybe a few others, should be able to hang with a quality Class 4A team.
But Plain Dealing may not be your ordinary Class 1A team this season. The Lions have already avenged their two losses to open the season last year and have some skill-position players that could play for anybody.
You can bet Benton coach Reynolds Moore and the Tigers won’t be taking the Lions lightly. The teams are pretty familiar with each other having played 7-on-7 games almost every week during the summer.
The Benton defense will easily be the toughest Plain Dealing has faced this season. The Tigers offense will be looking to make a statement after a disappointing performance against Haughton.
Benton will have few if any players playing offense and defense. As usual, Plain Dealing will have a lot. The Lions could use another cool night like last Friday. If they can get off to a good start and their conditioning holds up in the second half, it just might still be a ball game in the fourth quarter.
Bossier made marked improvement from Week 1 to Week 2. If not for a couple of turnovers, the Bearkats would’ve beaten Huntington. They outplayed the Raiders after Huntington took a 12-0 lead in the first two minutes.
But the Bearkats are taking a big step up in competition against Northwood, which has big-play potential on offense. Bossier will need to sustain some drives, run clock and have no turnovers to stay in the game and have a chance to pull off a big upset.