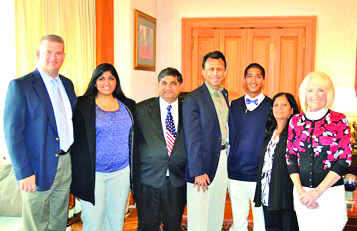 It’s not an every day occurrence to have a one-on-one chat with the Governor.

Especially for a high school student. To be personally invited to the Governor’s mansion in Baton Rouge is quite an honor and one that Airline senior Abhishek Shah can say actually happened.

Shah, along with his family and Principal Jason Rowland, made the trip to meet Louisiana Governor Bobby Jindal last week. The group spent the afternoon with Jindal, talking and exchanging stories about life, and touring the capitol grounds.

Turns out that Shah and Jindal have a little something in common – both are children of Indian decent whose parents came to this country seeking the American Dream. Shah’s parents,  Shailesh and Mita Shah, left everything in India and moved to the United States in 1992.

“My parents came here with nothing and have worked hard to be successful,” Shah said. “They have lived the American Dream.”

Jindal’s story is similar. The son of immigrants from India, Bobby Jindal became the first Indian American elected governor in the United States.

Shah said the best part of the trip was seeing how personable Jindal was.

“He is a great person. He talked to me like a normal person and that was admirable to me,” Shah said. “Regardless of how influential you are or what your status may be, you’re still a person. That’s what he conveyed to me.”

The trip was arranged by Board of Elementary and Secondary Education member Jane Smith.

“I’ve been a friend and supporter of [Bobby] Jindal for many years,” Smith, a former state representative and Bossier Schools superintendent, said. “I like keeping up with what’s happening around Bossier Schools and [Abhishek] stood out as a student of great character.”

Smith first heard of Shah when he was recognized at a Bossier City Council meeting. It’s easy to say that Shah has made quite a name for himself in the Bossier community.

Shah has also been chosen to represent Louisiana in the 2014-15 United States Senate Youth Program. This program, sponsored by the William R. Hearst Foundation for the past 53 years, recognizes outstanding students who represent the nation’s future leaders.

Shah was selected based on a written exam and interview conducted in November. As one of two state delegates from Louisiana, he will travel to Washington D.C. In March for a week to participate in the U.S. Senate Program. He will also receive a $5,000 college scholarship, which will help him in his future endeavors at the Massachusetts Institute of Technology in Cambridge.

Shah hopes that he will inspire others to pursue their own dreams.

Smith said that kind of positive outlook is reassuring of future generations.

“Abhi is a great ambassador for Bossier Parish. He is an intelligent, hard working student who is also kind and humble,” Smith said. “What inspired me the most about him is how much he loves this country. For a senior in high school to have that much depth and understanding of the American Dream makes me rethink how fortunate I am to live in this country.”