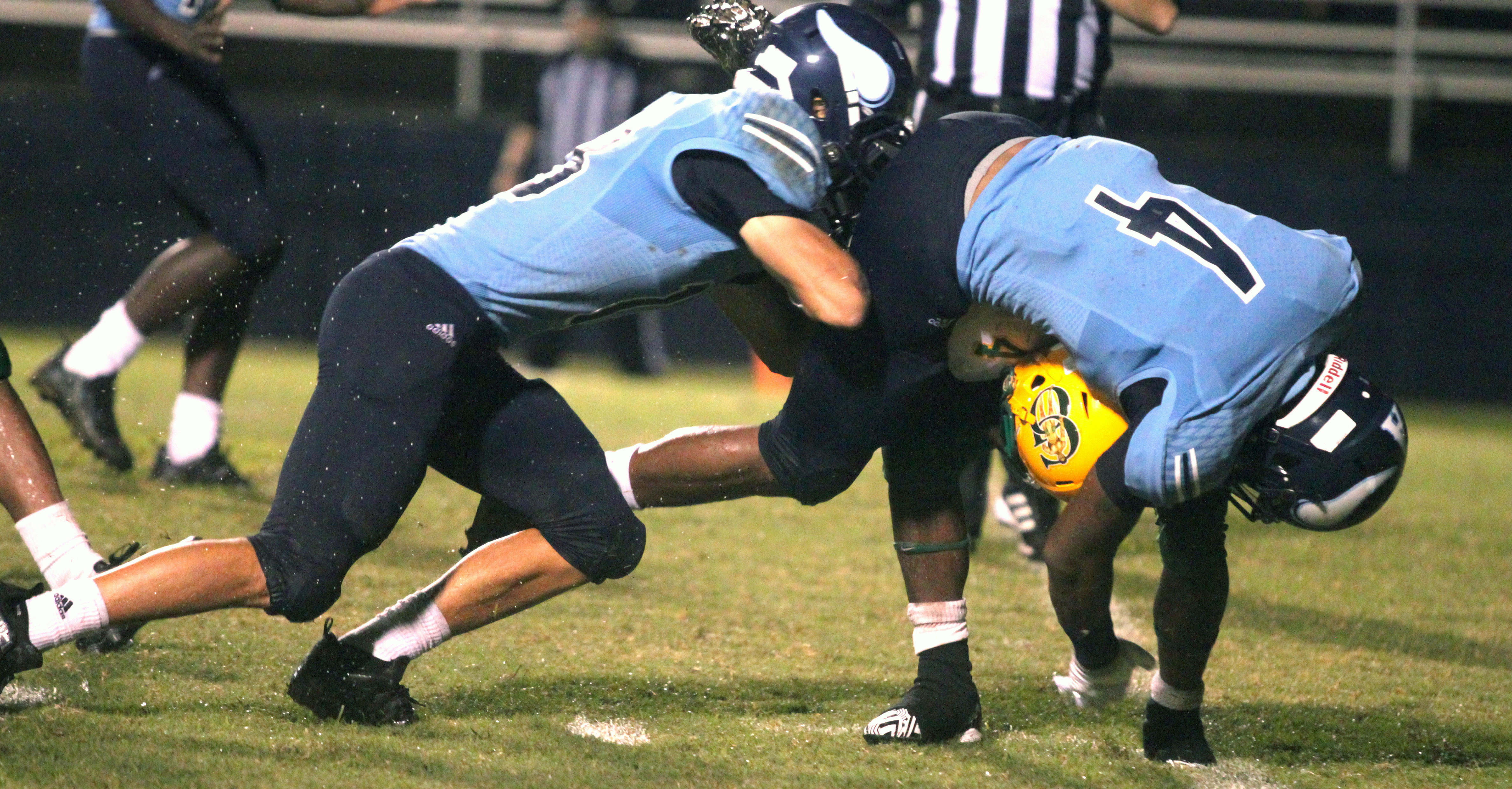 With heavy rain coming down, the Green Oaks Giants surprised the Airline Vikings by taking an early 6-0 lead Friday night at Airline Stadium.

The Vikings reacted by scoring 62 unanswered points and cruised to a 62-6 victory.

Airline broke the game open in the second quarter, scoring four touchdowns for a 34-6 halftime lead. The Vikings defense set up some of those with interceptions. Tyrice Neal returned one for a touchdown.

The first six minutes of the game was played in a heavy downpour. Once the clouds gave way to a beautiful sunset behind Airline Stadium, the Vikings started pulling away.

Neal had two interceptions in the second quarter. Xavier Johnson had one that set up a touchdowns. The Vikings’ pressure up front on Green Oaks quarterback Jaylon Carey contributed to the interceptions.

“We weren’t expecting any rain and it was a torrential downpour,” Airline coach Bo Meeks said. “It took us awhile to get adjusted. We adjusted pretty quick and settled in and took over up front and played the way we’re supposed to play. (Green Oaks) did a great job of fighting tonight so we had to come out and play well.”

Darian Germany scored Airline’s first TD to tie the game at 6 in the first quarter. Quarterback Thomas McKain had a rushing touchdown and hit Shun’Cee Thomas with a shovel pass that resulted in a 29-yard score. Thomas also scored on a run.

“The second quarter it really turned fast,” Meeks said. “We had the opportunities and we made the plays really from the second quarter on. It was an overall team effort tonight. I’m really proud of the job we did.”

Brian Fielding scored early in the third quarter to make it 41-7 and the Vikings’ reserves took over from there. Javarious “JuJu” Jones, Cameron Davis and David Maxey all had rushing touchdowns.

The Vikings also got some nice punt returns from Jaylyn Thomas, including one to the 1-yard line.

The only negatives were three early turnovers and several penalties, including three straight on the offense at one point in the second quarter.

“Against great football teams we can’t make those kind of mistakes,” Meeks said. “That’s something that has to be corrected. We’re going to keep grinding on it and get ready for Ruston this week.”

The Vikings will be looking for a little revenge when they travel to Ruston Friday. Last year, the Bearcats won 12-7. Airline dominated on defense, but five interceptions proved costly.

Ruston improved to 1-1 with 24-8 victory over East Feliciana.