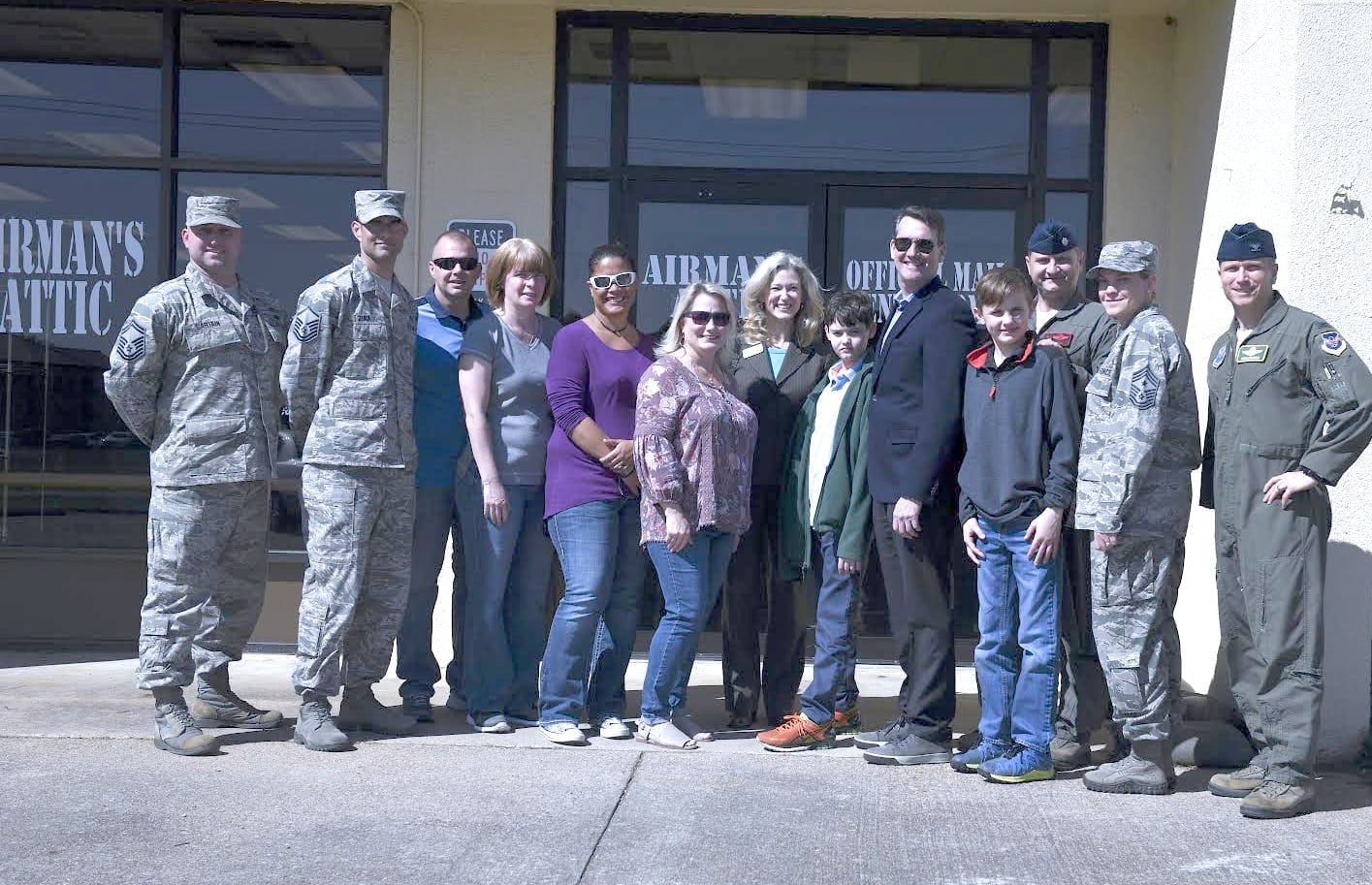 The Airman’s Attic located at Barksdale Air Force Base received a generous donation of $5,300 earlier this spring for a new outdoor storage unit.

These funds were graciously gifted by New York City-based The Kaplan Public Service Foundation on March 21. This foundation’s mission is “providing citizen leaders opportunities to become more involved with members of the US Military and their missions in an effort to bridge a widening gap between the civilian and military communities.”

The Attic, as it is commonly referred to, is a thrift shop for military members. Donations of items come from fellow Airmen as well as donors from the community.

Stephanie Markin, the wife of a 30-plus-year military veteran, runs the Attic. She said the storage unit was damaged and a lack of funding prevented repairs.

“We had one of those thin metal sheds like you would have in your backyard. It was down in the fenced area at the end of our parking lot and people could drop off their donations there after hours,” she Markin explained. It was falling apart, and so we had been trying to fundraise and get the money for it ourselves for at least a year. And we had gotten money for it, but then it wasn’t approved.”

David Kaplan, of the Kaplan Public Service Foundation, heard about the need for a major upgrade to the Attic, which he said was a store unlike anything he had come across at other military bases.

Interested, he flew to Bossier and met with Markin. She showed him the failing storage shed and told him how much they needed to replace it. Markin hoped that they might pay for half of it.

He ended up telling her, “We’ll make it happen.”

Kaplan and the Public Service Foundation ended up paying for the entire unit.

“It’s just been a huge blessing. I don’t know how we got so lucky,” Markin marveled. “It’s funny because it’s just a shed. But for myself and some other sponsors who are here constantly because we believe in this so much!

She noted the new unit is twice the size and that because it’s water tight, people can drop off items safe in the knowledge that it’s going to be in good shape.

“We believe in helping our young Airmen. I mean, for days we were just looking at each other like, ‘We got a new shed!’” Markin explained. “It’s a huge deal to us and it’s just been amazing so far. We can’t thank the Kaplan Public Service Foundation enough.”

The Attic is run by volunteers only, and welcomes interested community members to consider getting involved. Volunteering at the Attic takes a certain level of commitment.

“Part of the problem is that we need volunteers that can be there on a steady basis. It is a lot of work. There’s a lot of training that goes into things we do here,” Markin explained. “We have a gal whose son had joined the military last fall, and she found that we were doing gift-wrapping. She sent me a message and said that she’d love to help out. I met her at the gate, and she ended up wrapping gifts every day with us. And now she comes every week and volunteers with us.”

Community members with items for the home, clothing or good for the food pantry are encouraged to drop items off at the Airman’s Attic on 431 Wilbur Wright Boulevard. The shop opens weekly on Tuesdays from 11 a.m. to 3 p.m. and Thursdays from 2-6 p.m. For more information or those interested in volunteering can call (318) 456-2400.