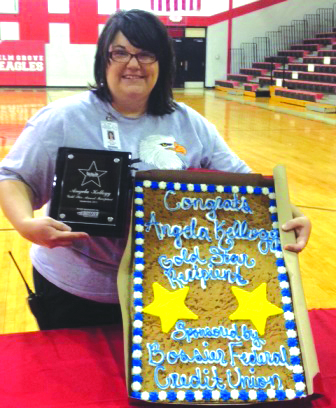 If ever there was a friend, colleague or teacher someone would want to have, it would be Angela Kellogg.

Not a day goes by that the Elm Grove Middle School Paraprofessional is not willing to go out of her way to help. She has that “go get them” attitude, which her co-workers will tell you is contagious. Needless to say, she is loved by faculty, staff and student body alike at The Grove.

“Angela is constantly saying she is ‘just a para,’ but she is constantly going above and beyond for our school,” wrote Megan Colgin, who nominated Kellogg for the Gold Star employee award. “She stays late to fix technology issues, she is an awesome paraprofessional in the classroom and she is also the mascot sponsor … She would do anything for the Grove!”

Colgin’s nomination was one of several submitted to honor Kellogg. Others described her as “amazing;” “always so positive and such a blessing to us;” and a “tireless volunteer.”

It is those attributes that have earned Kellogg the honor of being named Bossier Federal Credit Union/Bossier Schools’ first Gold Star winner of the 2013-14 school year. She could not have been more surprised when she walked into the gymnasium to loud cheers and a standing ovation.

After the initial surprise, Kellogg wiped away tears.

“I do have a lot of pride in my school and that’s why I do what I do; not to be honored,” the nine-year Bossier Schools employee said. “They treat me like an angel everyday and tell me how much they appreciate me,” Kellogg added. “There are so many people that work just as hard; I’m just part of the big picture.”

Kellogg says her real reward is seeing her students succeed.

“As a para, I get to work with students one on one and seeing them struggle and then succeed is so worth it.”

“She just does everything and anything to make Elm Grove successful,” Boyett said. “For schools to be successful it’s not administrators; it’s the great faculty and staff that make up the school and she’s one of the great ones.”

Kellogg was presented a Gold Star plaque by Bossier Federal Credit Union representatives, as well as a cookie cake. She will also be recognized at the October 3 Bossier Parish School Board meeting.

Her colleague, Missy Harper, perhaps summed it up best.

“There are very few people who not only make an impact in the lives of our students but also make an impact on the employees she works with on a day to day basis,” wrote Harper.

“She constantly has older students come back to visit her; not because she helped them with one test or even greeted them with a smile. They come visit her because made a difference. She walked in their lives and showed them with actions and words that they are worth something great … She is a huge part of our success and for many students, the only reason they come to school. As for me, she is a hero! She is someone who I admire. There is no other person I would want to represent our parish than Angela Kellogg.”