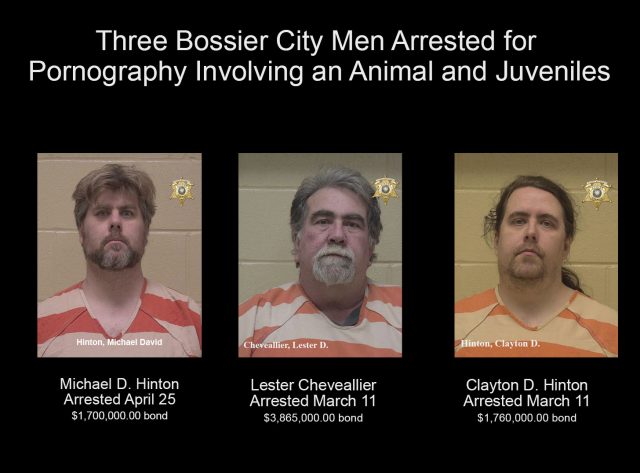 Michael D. Hinton, 41, of the 6200 block of Hollyhock Lane in Bossier City, was arrested on April 25,
for possessing child sexual abuse images and or distributing sexual abuse involving animals. After detectives
obtained and executed a search warrant during their initial investigation of Lester Cheveallier’s residence on
March 11, they performed a forensic examination of a shared computer in the home. That investigation revealed
that Clayton had also downloaded child pornography and sexual abuse involving animals. He was arrested and
charged with 150 counts of Pornography involving Juveniles and eight counts of Sexual Abuse of an Animal.

Stemming from his original arrest, Lester Cheveallier’s charges have been upgraded after a more thorough forensic examination of his computer. He now has 343 counts of Pornography Involving Juveniles and one count of Sexual Abuse of an Animal. His bond is now set at $3,865,000.00. He is currently housed in the Bossier Max.

After his original arrest, detectives have also upgraded Clayton D. Hinton’s charges to 56 counts of
Pornography Involving Juveniles and one count of Sexual Abuse of an Animal. His bond is now set at
$610,000.00, and he is also housed at the Bossier Max.