A suspect wanted by the Natchitoches Police Department for attempted murder is behind bars following his capture Tuesday night in Bossier City.

Members of the Bossier City Police Department SWAT team along with the United States Marshal’s Violent Offenders Task Force arrested Brandon Steven Jackson, 24, of Natchitoches on warrants charging him with attempted second degree murder and felon in possession of a firearm. 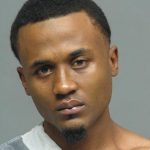 Jackson, who was consider to be armed and dangerous, was wanted by Natchitoches authorities in connection with a shooting last month at an apartment complex that left one man wounded.

The U.S. Marshal’s Violent Offender Task Force received information that led officers to a residence in the 700 block of Dickerson Street in Bossier City where Jackson was taken into custody without incident.

Jackson was booked into the Bossier City Jail as a fugitive. He was later transferred into the custody of the Natchitoches Police Department.