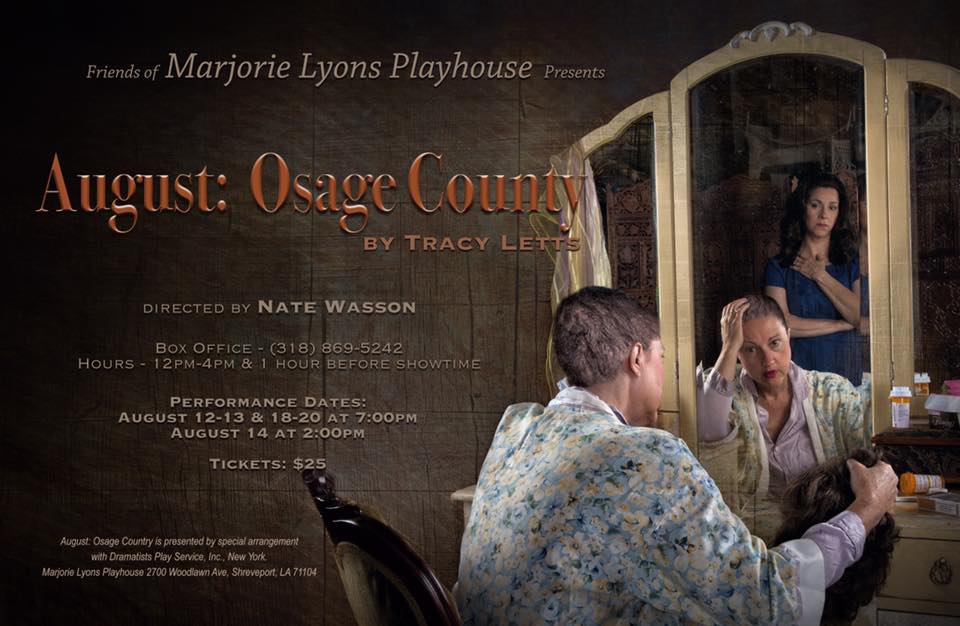 When the large Weston family unexpectedly reunites after Dad disappears, their Oklahoman family homestead explodes in a maelstrom of repressed truths and unsettling secrets. Mix in Violet, the drugged-up, scathingly acidic matriarch, and you’ve got a family drama that unflinchingly—and uproariously—exposes the dark side of the Midwestern American family.

Winner of the 2008 Pulitzer Prize and Tony Award for a staged-drama, and recently released as a film featuring Meryl Streep, Tracy Letts’ ferociously entertaining dysfunctional family play comes roaring into the twenty-first century with eyes blazing, nostrils flaring and fangs bared. Laced with corrosive humor so darkly delicious and ghastly that you’re sure to squirm in your seat even as you’re doubled-over laughing.

August: Osage County will run for six performances, opening on August 12th and closing August 20th. All performances will be held at Marjorie Lyons Playhouse on the Centenary College campus. Dates and performance times are as follows:

Tickets are $25.00 and can be purchased by visiting the Box Office at the address listed above during operating hours, or by calling (318) 869-5242. The Box Office will be open Monday through Friday from 12:00pm-4:00pm, as well as an hour before each performance.