The Bossier Sheriff’s Office is looking for the person caught on video while using a stolen debit/credit card at Bossier businesses after he burglarized at least two vehicles in the Lakewood Subdivision in the past week and possibly others in recent days. 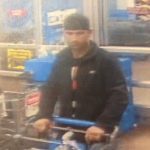 Detectives determined that the suspect used the stolen card to make two separate purchases at Wal-Mart on Airline Drive. Video surveillance footage of the suspect obtained by detectives also shows the same suspect using a stolen card at the nearby Murphy USA Gas Station.

Based off the surveillance video, detectives are looking for a white male in his 20s or 30s, driving a mid-2000 model white Toyota Tundra, extended cab with chrome Nerf bars, possibly bearing Texas tags.

The suspect or possibly other suspects have been burglarizing vehicles in Lakewood and Bayou Bend subdivisions by stealing items from UNLOCKED vehicles, with no reports of any vehicles broken into with forced entry. Detectives want to remind residents that these vehicle burglaries are often crimes of opportunity and can be avoided if residents would lock their vehicles and remove valuables or other items from plain site in their vehicles.