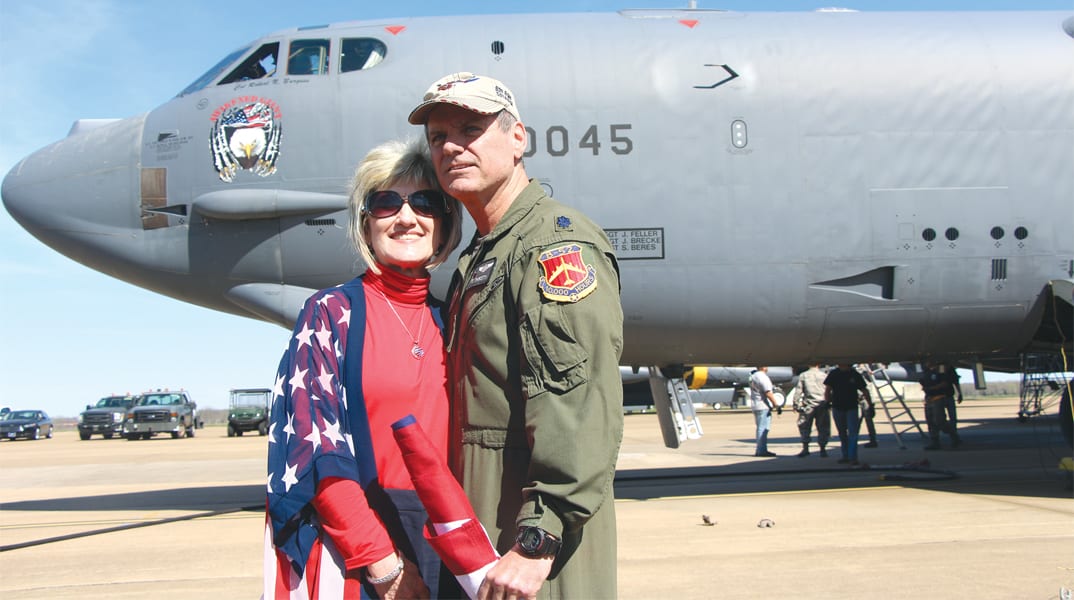 You see them soaring through the skies above Bossier Parish.

The sound probably catches your attention first. You stop, look up, and pause for a moment. Have you ever thought about who is flying those magnificent birds of freedom?

Smith joined the United States Air Force and graduated navigation school at Mather Air Force Base in 1985, where he earned his wings and received his first and only jet assignment for the B-52. Three decades later, he has more flight hours in the B-52 than any other officer currently serving in the Air Force.

On March 3, Smith made his 10,000 hour flight.  It’s quite an impressive feat, and one that certainly did not go unnoticed.

His wife, Jayne Smith, and stepson, Trey Boyette, surprised him on the flight line following the historic flight with a group of his family, friends, airmen and several special guests.

“I am just so proud of him,” Jayne said, with an ear-to-ear smile on her face. “He has worked so hard and put in a lot of hours. He’s been away from home a lot and away from us as a family and as a couple. When he’s away like that, it just makes these times even more special.”

Seeing him land the plane and taxi onto the runway right in front of them made her heart swell. She couldn’t contain her excitement, clapping and cheering as he neared.

When he stepped off the plane, she went straight into his arms.

“To know that when he’s away from us, he’s making sacrifices for our country,” Jayne said. “He deserves this.”

As a navigator with the 93rd Bomb Squadron belonging to the 917th Wing at Barksdale Air Force Base in Louisiana, Smith has distinguished himself as one of the nation’s most experienced navigators. He has flown 1,891 sorties, logged 496 combat hours, and flown 42 combat sorties. He’s been in four wars — the Gulf War (Desert Storm), Operation Enduring Freedom, Operation Iraqi Freedom and Operation Inherent Resolve. Smith was also awarded the Air Medal in 1991 and the Aerial Achievement Medal in 2002 and 2004.

So what does a three decade career flying B-52s look like? Let’s do some math.

But that’s not all.

Smith is very humble, though.

“I keep getting asked what this 10,000 hours means,” Smith said. “Honestly, it really doesn’t mean anything as an individual. I didn’t get to 10,000 hours by myself. This is not a single man aircraft. There’s a five man crew at least. It’s those men that always made it happen. We all flew together, we fought together, and we all won together. That’s 10,000 hours right there.”