An airman is in custody at Barksdale Air Force Base on suspicion of murder after his 2-year-old step-son was found dead at the family home.

KTBS reports that the toddler’s mother found her son dead in bed Tuesday morning at the family’s residence in one of Barksdale’s housing units, authorities said. The child had been dead for several hours.

The airman, whose name had not been released on Wednesday afternoon, is a security officer at the base, a spokesman for Barksdale said. 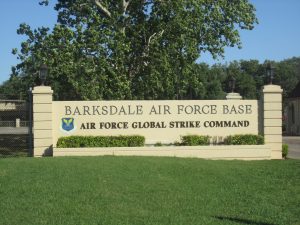 “I can confirm that an airman assigned to the 2nd Bomb Wing has been taken into custody as a result of an incident that occurred on Barksdale Air Force Base yesterday. An investigation is pending and more details will be provided as appropriate. At this point no charges have been made against the individual,” Maj. Phil Ventura, chief of public affairs, said in a statement released to KTBS.

The airman is in military custody after being questioned by investigators from the Air Force Office of Special Investigations, which has jurisdiction in the case.

An autopsy will be done to confirm the child’s cause of death.