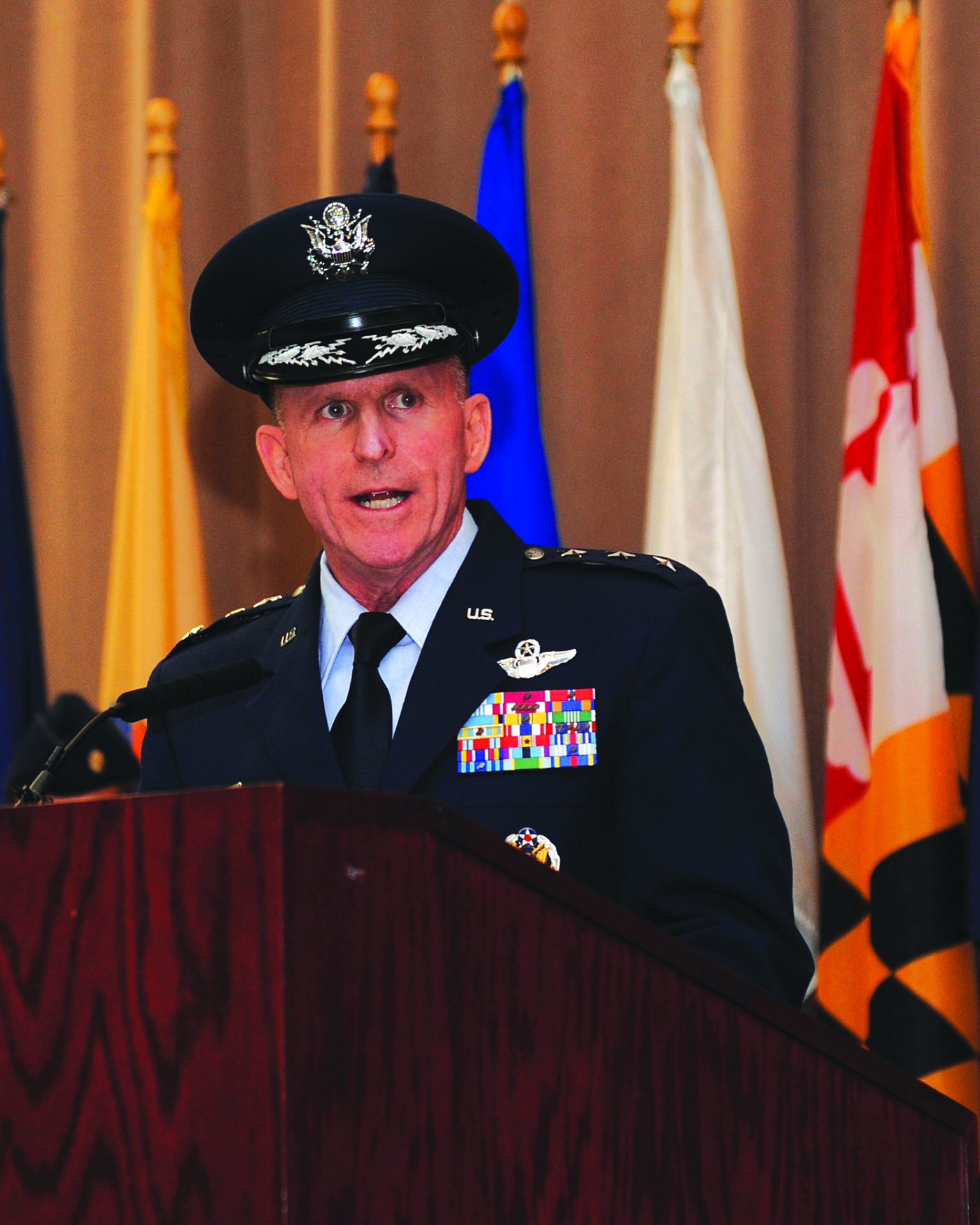 Presiding at the ceremony, Air Force Chief of Staff Gen. Mark A. Welsh III said Wilson “comes from a warrior family, and now he’s going to lead one.”

“This command, this commander and the 26,000 Airmen he leads are trusted with two-thirds of our nation’s nuclear triad,” Welsh said. “What you do is provide our nation with the ability to hold any target at risk, anywhere in the world, at any time. You know that, the rest of the world knows it and that’s why strategic deterrence works.”

Wilson succeeds Lt. Gen. Jim Kowalski, who has been an integral part of AFGSC since the command’s beginning.

“I fully understand the importance of our nuclear and global strike mission to provide safe, secure and effective deterrence for our nation,” Wilson said. “It’s the Air Force’s most important mission — one we can never get wrong.”

“In our business, perfection is the standard, and there’s no room for incomplete knowledge or substandard performance,” Wilson said.

Wilson comes to the position after serving as the Eighth Air Force commander since 2011. In that position, he oversaw and managed three bomb wings and a headquarters staff supporting more than 12,000 personnel in maintaining nuclear readiness for the bomber leg of the United States’ nuclear triad.

In his farewell address, Kowalski praised the Global Strike Airmen for their hard work and dedication.

“You, the Airmen of Global Strike Command, delivered,” Kowalski said. “You improved readiness by 37% during a time when the rest of the Air Force was just able to hold its own. You achieved nearly a 50% reduction in outstanding security objectives. You won the General Creech award for the best aircraft maintenance of any Air Force major command. You stood up the first-ever 24/7 tactical response force alert, while pushing ICBM on-alert levels to the highest numbers since 2001. And in 2011, you led U.S. Strategic Command’s first-ever combat action during Operation Odyssey Dawn, decimating the Libyan Air Force.”

Vander Hamm said it is an honor to take over as commander from Wilson.

“I pledge my allegiance to you, the men and women serving to create an environment where you can train and fight, and provide you with the resources to accomplish your mission. It’s onward and upward for the Eighth Air Force,” he said.

“There is no other air force on the face of the planet that can do the kinds of operations that are routinely performed by the Mighty Eighth,” said U.S. Strategic Command commander Gen. C. Robert Kehler, who presided over the ceremony. “This is no longer ‘one size fits all’ deterrence and assurance. This is tailored deterrence that is shaped specifically for an adversary; that is shaped specifically for a target audience and done with tools that include our long-range strike capabilities and those capabilities that we have come to rely on for all these years.”

Eighth Air Force has a storied past as being the greatest air armada in American history. At one point, the command was able to dispatch more than 2,000 bombers and 1,000 fighters and had an end-strength of more than 200,000 Airmen, earning it the nickname, “Mighty Eighth.”

Today, 8AF accomplishes this with the B-52 Stratofortress fleet based at the 2nd Bomb Wing here and the 5th Bomb Wing at Minot AFB, N. D., and the B-2 Spirit of the 509th Bomb Wing, Whiteman AFB, Mo.

Vander Hamm previously served as the director of plans, programs, requirements and assessments at Headquarters Air Education and Training Command at Joint Base San Antonio-Randolph, Texas.