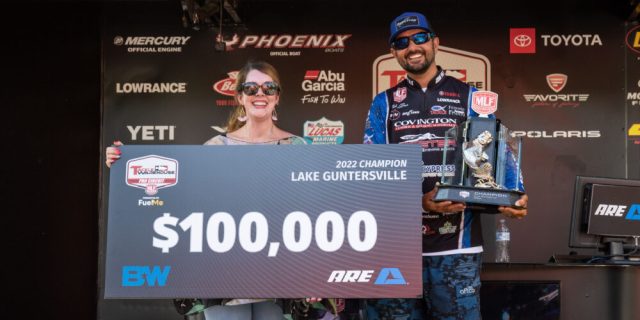 He claimed the $100,000 first prize in the B&W Hitches Stop 4 presented by A.R.E. tournament on Lake Guntersville.

The tournament is part of MLF’s Tackle Warehouse Pro Circuit presented by Fuel Me.

LeBrun caught a five-fish limit weighing 22 pounds, 15 ounces. Needing a 5-pound fish or better to take the title, he pulled a seven-pound largemouth out of his bag during the weigh-in.

It was his first MLF win since a Phoenix Bass Fishing League All-American title in 2018.

“It’s just been a phenomenal day. I feel so blessed,” LeBrun said in an MLF press release. “I started in my main spot first thing this morning and the eel grass was just out of control. I wasn’t even fishing – I was basically just raking grass with every cast and that started to spin me out a little.

“I knew where some more shallow stuff was, and some bream feeders and fry, so I decided to go hit that for a while. But even there, I just wasn’t seeing fish like I had been and was only catching small 10-inch fish.”

LeBrun said he spent an hour and a half trying to force the shallow bite to work and it just wasn’t happening.

“At 10 a.m. I had zero fish and was feeling really discouraged,” LeBrun said. “I pulled back to my main spot to find the eel grass had cleared out and we absolutely wrecked them for about 45 minutes. By 10:45 I had a solid sack of fish – I can’t ask for anything better than that.”

Only the top 10 after three days of fishing competed Sunday with weights going back to zero for all.

LeBrun got off to a slow start on the first day of the tournament. He weighed in a 16-15 stringer and was in 44th.

“Most of my fish this week came from a main river ledge, in water about 30-foot deep,” LeBrun said. “I had a few key baits, including a 4½-inch Producer Swimbait, blue-crack-colored, with a homemade ¾-ounce head that I was throwing on a Fitzgerald 7’6” All Purpose Casting Rod Heavy with a 7:1 Fitzgerald Stunner Casting Reel, paired with 18-pound Sunline Super FC Sniper Fluorocarbon . That’s what the 7-pounder, and most of my big ones, were caught on.

“That setup got them fired up, but when they went cold I had another waypoint where I would slide up shallow around the back and throw a 10½-inch V&M J-Mag Worm on a ¾-ounce, V&M Mega Shakey Head in a couple of different colors.”

It’s been a very good year for LeBrun.

He finished second in the  St. Croix Bassmaster Central Open at Ross Barnett presented by Mossy Oak Fishing in Ridgeland, Miss., in April.

“Seven-pounders are awesome and getting a top 10 is awesome, but that doesn’t compare to my relationship with Jesus Christ,” LeBrun said at the weigh-in.

“The last time I held up a check for Major League Fishing, I wasn’t the same guy I am today,” LeBrun continued. “The last time I stood on this stage and held up a trophy was at the 2018 All-American on Cross Lake, and that was a dark time in my life. There were a lot of things wrong, but shortly after that Jesus Christ redeemed me, and now I stand here giving Him all the glory – not myself, but Him.

“There’s nothing in life that’s too far gone with Him, so to stand here with my lovely wife Jolene by my side, and to be here with all of you, it really means a lot.”

— Featured photo of Nick LeBrun and his wife Jolene via Major League Fishing.