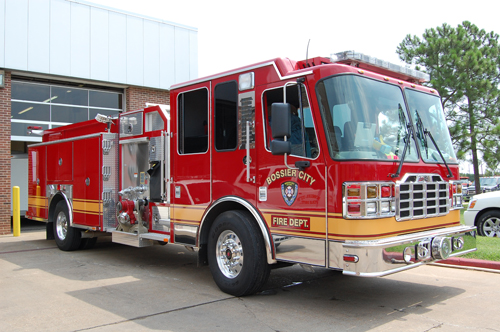 The program is put on each year during the month of October by the BCFD’s Fire Prevention Bureau to teach school children about fire prevention and safety through use of a multimedia presentation that includes a puppet show, video presentation and appearances by Sparky the Fire Dog and Freddie the Fire Truck. Fire Chief Brad Zagone, Mayor Lorenz “Lo” Walker and Bossier Parish Schools Superintendent D.C. Machen are scheduled to attend Tuesday’s kick off.

During the month of October, fire prevention officers will put on the program for more than 6,000 thousand children from elementary schools and child care facilities in Bossier City. The Bossier City Fire Department conducts the program in October of each year in conjunction with National Fire Prevention Week, which is observed this year from October 6 through October 12. This year’s National Fire Prevention Week theme is “Prevent Kitchen Fires!” with the focus being preventing cooking fires in the home.