The Bossier City Police Department is investigating the robbery of a local bank. The robbery occurred at the Citizens National Bank in the 2000 block of Benton Road at approximately 1:45 PM today. According to witnesses the suspect described as a black male wearing a dark jacket and what appeared to be a camoflague ball cap walked into the bank, approached a teller and displayed a sign with an inscription demanding money. The suspect never produced a weapon nor did he indicate that he had a weapon. The teller compiled and suspect left the bank with an undisclosed amount of money and reportedly fled the scene in a gold colored Toyota Camry driven by a black female. The vehicle was last seen heading north on Benton Road. Anyone who has information about this case or can identify the suspect in the attached bank security camera photo is asked to call Bossier crimestoppers at 318-424-4100. 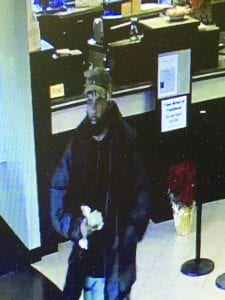