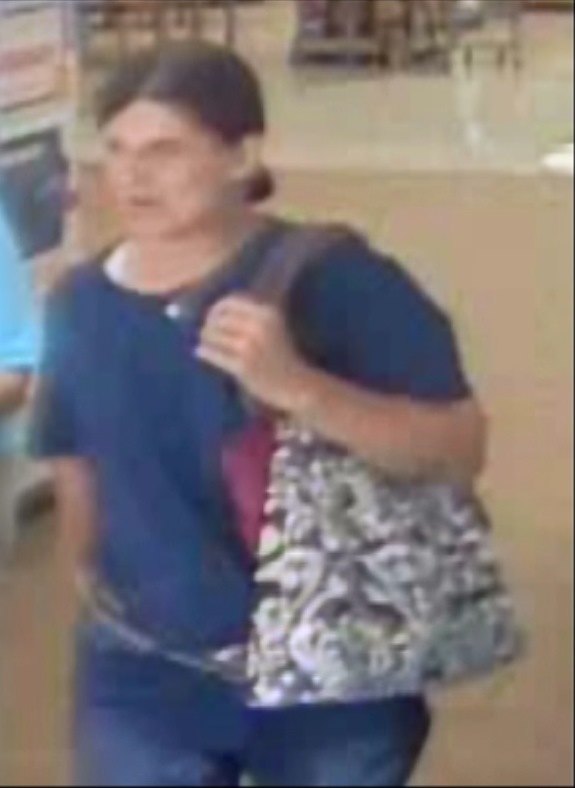 UPDATE: Bossier City police made two arrests today in this case. Detectives arrested Shawntell Roberson Eppinett, 31, of Baton Rouge, Louisiana upon receiving an anonymous tip called into Bossier Crime Stoppers. That tip led police to the Bossier Inn and Suites in the 700 block of Diamond Jacks Boulevard this morning were Eppinett had been staying with her boyfriend, Joseph John Pomares, 42, of Baton Rouge. Detectives determined Eppinett was the subject seen in security camera video stealing the purse and using the victim’s credit card to make authorized purchases. She was subsequently booked into the Bossier City Jail on charges of theft and unauthorized use of an access card as theft.  Detectives say Pomares acted as an accomplice and was also arrested and booked on the same charges.

Bossier City police and Bossier Crime Stoppers are asking the public for help with finding a woman who was caught on video stealing a purse and later using the victim’s credit card at one of several local businesses.

One video shows the suspect, who appears to be a woman, taking the purse out of a shopping cart while the victim had her back turned at the Walmart store in the 2500 block of Airline Drive last month. The suspect can then be seen walking out of the store attempting to conceal the stolen purse under what is believed to be her own purse.

Later that same day the suspect used a stolen credit card belonging to the victim to make unauthorized purchases for more than $1000 at several local businesses before the victim could cancel the account. One of those transactions was caught on security camera video.

Bossier City police say this crime demonstrates how easy and quick it can be for criminals to steal and serves as a reminder to be particularly watchful of purses, wallets, cell phones and other personal belongings while shopping, especially during the upcoming holiday season. While it can be easy to fall victim to a crime like this is just as easy to prevent it from happening. Police say you can deter purse snatchers and pickpockets by carrying a purse close to your body, not dangling by the straps or leaving it unattended in shopping car. Wallets should be placed inside a coat or front pants pocket.