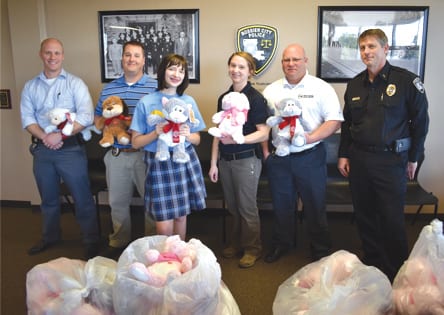 It was a special delivery to the Bossier City Police Department. One-hundred new stuffed animals were dropped off to detectives of the Juvenile Investigations Unit as part of the Bear Share project. Detectives and patrol officers will, in turn, give the toys to children in traumatic situations.

Bear Share was started by 11-year-old Julianna Gouthiere in May of 2013. At the age of 6, Juliana was told a story about how her mother, Amanda, was given a stuffed animal by a first responder after a life-threatening motorcycle accident. Julianna was inspired by her mother’s story.

As of December 2018, Bear Share had donated over 16,000 stuffed animals to different agencies in six states and two countries. Just one month later, Julianna reached another milestone. She announced that the total number of stuffed animals donated through the project has now reached 17,000, www.facebook.com/geauxshowlove/videos/435908406947904/ .

Bossier City Police gratefully accepted the stuffed animals that will help them give comfort to children in crisis.