Ask parents and the principal at T.L. Rodes about Becky Reeves and they will tell you she is close to being a miracle worker.

The Early Childhood Special Education teacher stops at next to nothing to help the children in her care overcome obstacles and meet developmental milestones. And it is not just within school hours.

One thing that impresses T.L. Rodes Principal Lisle Meador the most is Reeves will meet her students at their family’s church and take care of them so the parents can attend worship service.

“That’s just the kind of person she is and not a lot of people know that except for her kids’ parents,” Meador said. 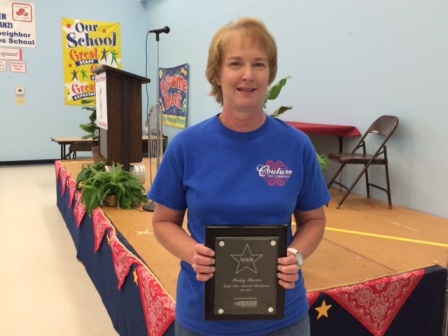 Jennifer Hillman’s son has been in Reeves’ class for two years and considers him a lucky kid. She nominated Reeves for Bossier Schools’ Gold Star employee award, writing “She has high expectations for all of her students and it shows when I see how much my son has learned to do.”

The mother added, “She thinks of ways to help him not only at school, but also at home. It is not uncommon for me to get an email from her, sent late in the evening, about a new app for his iPad, a special step stool to help him be more independent, or a suggestion for handling a challenging behavior.”

It was Hillman’s touching letter that led Bossier Federal Credit Union, sponsor of the Gold Star program, to choose Reeves as the final recipient for the 2014-15 school year.

“I love the little ones,” Reeves said quietly. “I like the challenge of figuring out what’s going on, how to get past a certain problem and learn a specific skill.”

Her students have certainly crossed hurdles, Meador commented. She shared that a child in a wheelchair was walking by year’s end, thanks to Reeves’ determination.

Another story involves a child who was non-verbal.

“I have one this year who’s been with me for three years and wasn’t talking,” Reeves said. “He’s been really close to talking and he crossed that gap this year. He tells me ‘I love you’ when he gets on the bus.’”

Just as important as working with the children is the relationship Reeves develops with their parents.

“All in all, my two or three years with them won’t make as much of a difference as them,” Reeves said. “I tell them they are their child’s number one advocate.”

It’s something Hillman appreciates as a mother, calling Reeves her son’s biggest cheerleader.

“It is a great feeling for a parent to know their child’s teacher truly cares.”

Congratulations to Becky Reeves for being Bossier Schools’ shining Gold Star. It is an honor well deserved.