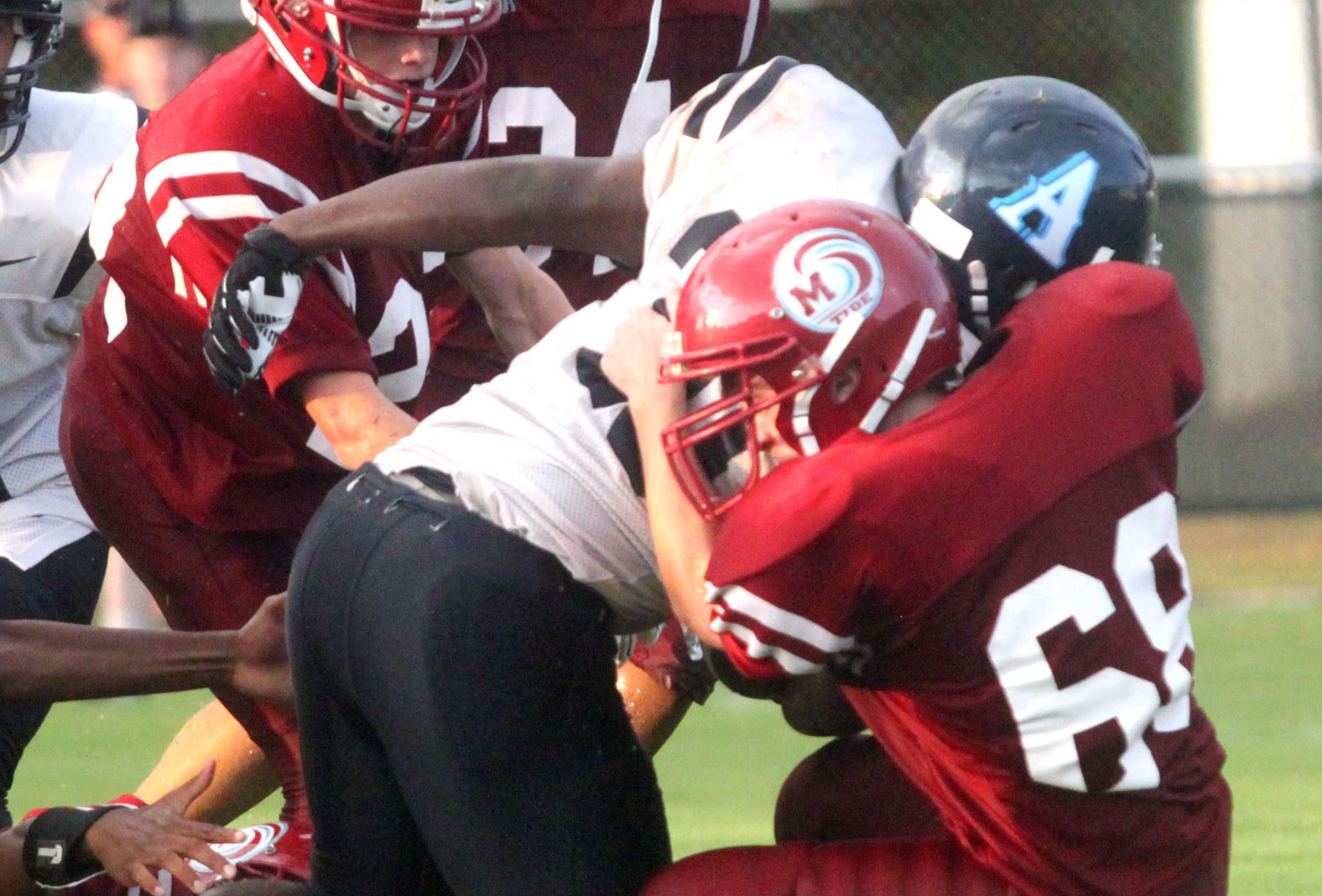 Each of the four “games” consisted of two eight-minute halves. The best was the first as Benton edged Haughton 12-7. North DeSoto followed that with a 21-0 win over Parkway. Most of the second half was played in a torrential downpour.

Garrett Hable tossed two touchdown passes in Benton’s victory. The first was a short pass to Brooks Cram, who pulled the ball in with his right hand in the right front corner of the end zone.

Cram’s catch capped a drive that started at the Benton 20 after the Tigers stopped the Bucs on fourth down. Jordan Miles had a nice catch-and-run on the drive. Doyle Adams Jr.also contributed with a catch to the 10 followed by a run to the 4.

It looked like the Tigers would take a 6-0 lead into the half when theY downed a punt inside the 5 with just seconds left on the clock. But Haughton quarterback Jalob Walker broke loose for a 96-yard touchdown run on the final play. Corbin Smith’s PAT gave the Bucs a 7-6 lead.

Benton regained the lead with 1:53 left in the game on a 17-yard pass from Hable to Adams. A try for two failed and the Tigers led 12-7.

Haughton drove down the field behind the running of Lavonta Gipson. The Bucs thought they had the victory when when Gipson broke outside and scored from the 2. But a penalty nullified the TD and the Tigers went on to win.

Parkway could get little going offensively in the loss to North DeSoto. EJ Williams had a couple of nice runs. North DeSoto ran the ball effectively and had a big pass completion that set up a touchdown.

The Airline-Minden game started in heavy rain that finally let up near the end of the first half.

Doimon Coleman gave Minden the early lead with an interception return for a touchdown. The Vikings got on the board with just 16 seconds left in the half on Brandon Brooks’ 3-yard run up the middle. David Maxey’s kick gave Airline a 7-6 lead.

Quarterback Tarik Demery scored Airline’s second TD on an 18-yard run around left end. He hit Randy Combs with a short pass for the third after jumping to get the ball over a rushinng Minden defender.

In the nightcap, Skylor Stromile threw two touchdown passes to lead Plain Dealing to the win.

The first went to Thomas Gay and covered about 50 yards. Gay caught the ball in the left flat and raced the final 35 yards to the end zone. Stromile scored the two-point conversion. Jarvis Johnson scored the final TD, catching a short pass in the middle of the end zone.