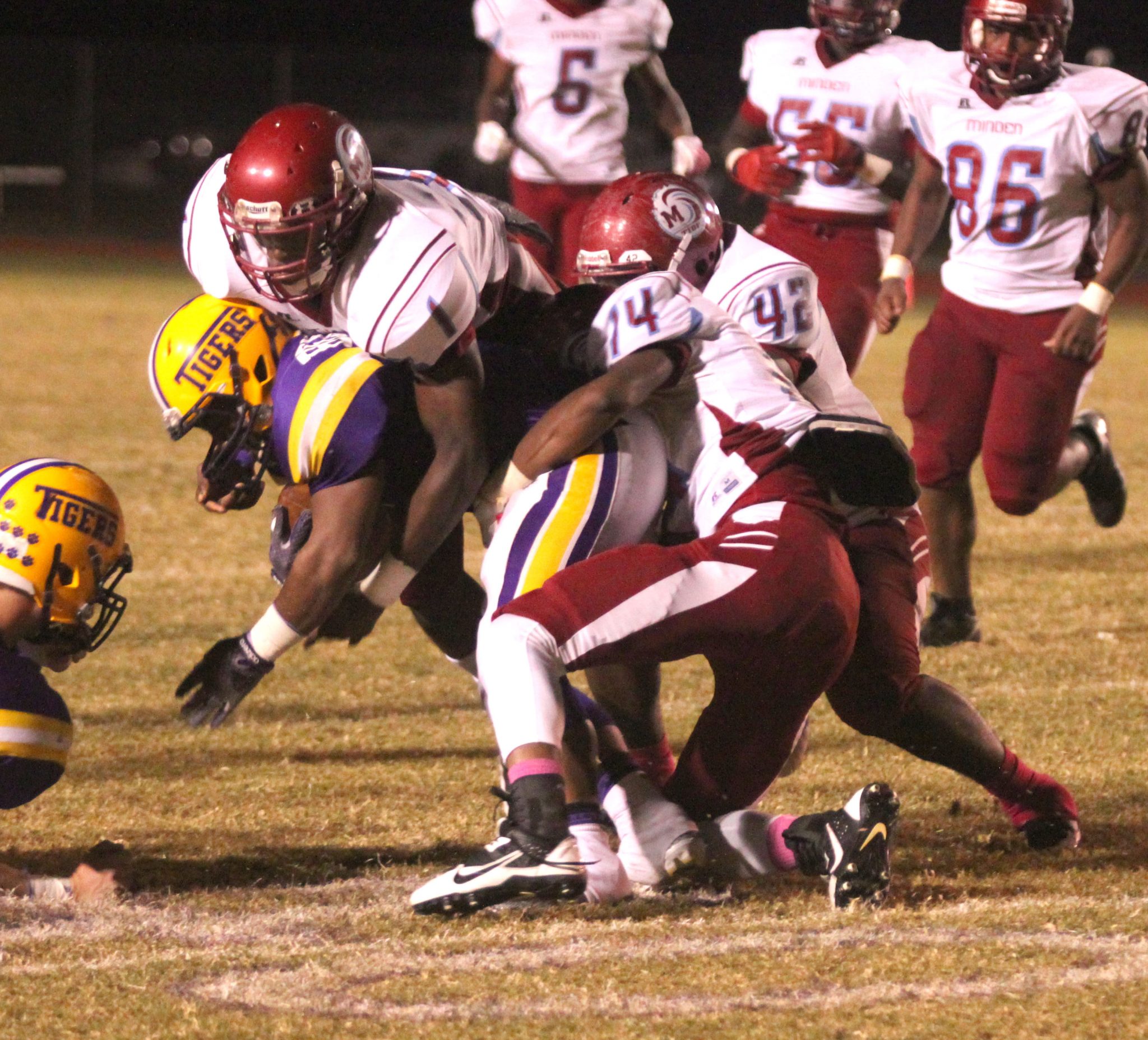 The Benton Tigers suffered their first District 1-4A loss Friday night in devastating fashion.
The Tigers fell to the Minden Crinson Tide 25-24 in overtime. The difference was a two-point conversion pass from Antonio Rivette to Tavarius Edwards after Minden’s overtime TD.
Benton’s Shane Cram had Edwards covered like the proverbial blanket in the front corner of the end zone on the Benton side of the field.
The pass was low and both players dove for it. Cram came close to knocking it away. But somehow Edwards was able to get a hand on it, pull it into his chest and cradle it above the ground as he hit the turf with Cram on top of him.
It was a sensational catch. Edwards could not have been covered any better.
Because it was on the opposite side of the field, there was a slight delay before the Minden bench realized the Tide had won.
Several Benton players went down on their knees, heads on the ground.
The Tigers saw their five-game winning streak come to an end. Benton (6-2, 4-1), Minden (5-3, 4-1) and North DeSoto (6-2, 4-1) are tied for the District 1-4A lead with two games to play. Fair Park (6-2, 3-2) is only one back.
“In some ways we kind of earned what we got,” Benton coach Reynolds Moore said. “We kind of did it to ourselves. I’m not taking anything away from Minden. They were fantastic tonight.”
It was Benton’s second overtime game of the season. In Week 6, the Tigers rallied from a two-touchdown deficit in the final 3:07 to beat Fair Park.
“I’m proud of our guys and their effort,” Moore said. “We came out on the different end of this a couple of weeks ago and I want to make sure we end up understanding that football evens things up sometimes. That’s what happened tonight. We got beat by a good football team.
“At the beginning of the year we said there wouldn’t be an undefeated team in the district when we got done. It looked like we had a chance. They came in here with a chip on their shoulder after that loss (23-0 to North DeSoto last week) wanting to prove something and they did.”
The Tigers had a chance to win in regulation. Thanks in part to three facemask penalties against Minden, Benton drove almost the length of the field to the Minden 11 with about two minutes left in the game. But the Tide picked off a pass over the middle at the 1 to end the threat and the game went into overtime tied at 17.
Benton got the ball on offense first in overtime. Two TJ Anderson runs got the ball to the 2 and Chauncey Taylor scored on third down. Jordan White’s PAT kick made it 24-17.
The Tide reached the 3 on its first play. On second down, the defense came up with a big play for a 6-yard loss. But on third down Rivette hit Kelcey Miller in the end zone for the TD.
Minden coach Spencer Heard decided to go for two, which didn’t surprise Moore.
“I told our coaches when it was third down that if they scored they’d go for two,” he said. “I didn’t think they’d kick it at all. I thought they’d take it playing at our place; having the momentum right there I thought they’d go for two. It was a good play, good call. The kid made a heckuva catch over there. You’ve got to give credit to him.”
Minden opened the scoring with a 30-yard field goal in the first quarter. Benton took the lead on Anderson’s 17-yard TD run.
That’s how it looked like the half would end. But Benton got a big break. The Tigers forced the Tide to punt with less than 20 seconds to play. The ball sailed over the punter’s head and the Tigers got the ball at the Minden 17.
Benton freshman quarterback Garrett Hable hit Tyler Stephens for a TD with 2.9 seconds left and the Tigers took a 14-3 lead to the locker room.
The advantage was short-lived because Minden’s L’Jarius Sneed returned the second-half kickoff 85 yards for a touchdown.
Rivette put Minden on top 17-14 late in the third quarter on a 19-yard scramble for a touchdown on fourth-and-long.
Before the drive, the Tide picked off a pass in the end zone and caught a big break when a high, short punt bounced into a Benton player.
The Tigers responded by driving to a 28-yard White field goal with 7:08 left.
Benton finished with 312 yards total offense. He made a few mistakes, but overall Hable did a solid job of running the offense. Playing in only his second full game, he completed 17 of 28 passes for 193 yards and rushed 11 times for 34 yards.
Stephens had six catches for 86 yards. John Westmoreland had three for 59.
Anderson led the Tigers on the ground with 57 yards on 15 carries.
Benton visits visits Northwood Thursday. The Falcons (3-5, 1-4) lost to Huntington 42-35 Friday night.
Evangel 42, Bossier 0: At Bossier, the Eagles proved too much for the Bearkats to handle.
Evangel scored three TDs in first and three in the second en route to a 42-0 halftime lead.
Evangel improved to 5-3 overall and 3-0 in District 1-3A. Bossier dropped to 0-8 and 0-3.
The Eagles out gained the Bearkats 443-73. Aareon Smallwood led Bossier with 36 yards on 11 carries and Isaiah McKinsey had 31 on 15.
McKinsey and Keimun Daniels led the defense with six tackles each. John Langston had four.
Bossier continues District 1-3A play next Friday at Mansfield. The Wolverines (4-4, 2-1) fell to North Webster 33-0 Friday night.