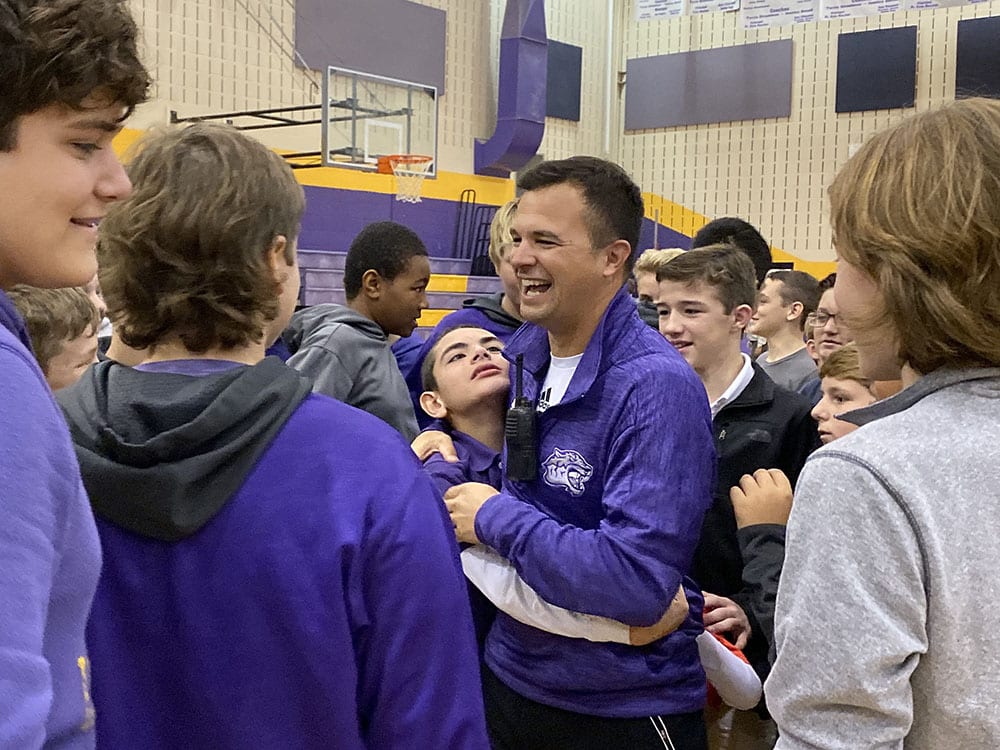 It would have been hard to find a dry eye in the stands or on the football field at the last eighth grade game between Benton and Rusheon Middle Schools.

Benton Middle Football Coach Jared Stowell beamed as he told how his and Landon Sandifer’s paths first crossed. While Sandifer was in P.E. class, he would see Stowell and his players practicing and watching football film. And though Sandifer was non-verbal, he had a way of expressing his dream of playing the game.

“He would point at the screen and pound his chest and go get a football, wanting me to throw it to him,” Stowell explained.

As a father himself of a son with special needs, Stowell got an idea and called Rusheon’s Coach Quarvay Winbush to see if he would help make it a reality. What played out in the final moments of that game will be forever etched in hearts and minds.

Sandifer was not expecting to be called onto the field and given the chance to put on a football helmet and run the ball. Not only did he run it, but both teams helped him get it across the end zone to score the final touchdown and lead his Benton Tigers to a win. The crowd went wild.

You can watch the video at the Bossier Schools’ Facebook page here: https://www.facebook.com/bossierparishschools/videos/759120891199064

“For a few moments, our whole community was focused on something much bigger than a score, being the best athlete, the prettiest cheerleader or whatever,” wrote Shelly Malone, who was a spectator in the stands. “Hundreds of kids celebrated together selflessly.”

“It was awesome and everything I could do to hold it back,” Stowell admitted. “His (Landon) family was in the stands, his sister is a cheerleader and was on the field, the band was in on it … it was awesome!”

“He gave me, a father of a special needs son, a special moment that I will always remember,” Brad Sandifer wrote. “I’ve always thought when I have a son, he would play all the sports I did when I was a kid. I realized the older that Landon got that there’s some things that he would never be able to do. I never thought I would ever see Landon play football and Coach let him make the last play of the game of the season. Seeing him out on the field doing that made me so proud!”

“It was definitely one of the best days of Landon’s life and one of ours to see him get to experience that,” added Racheal Sandifer.