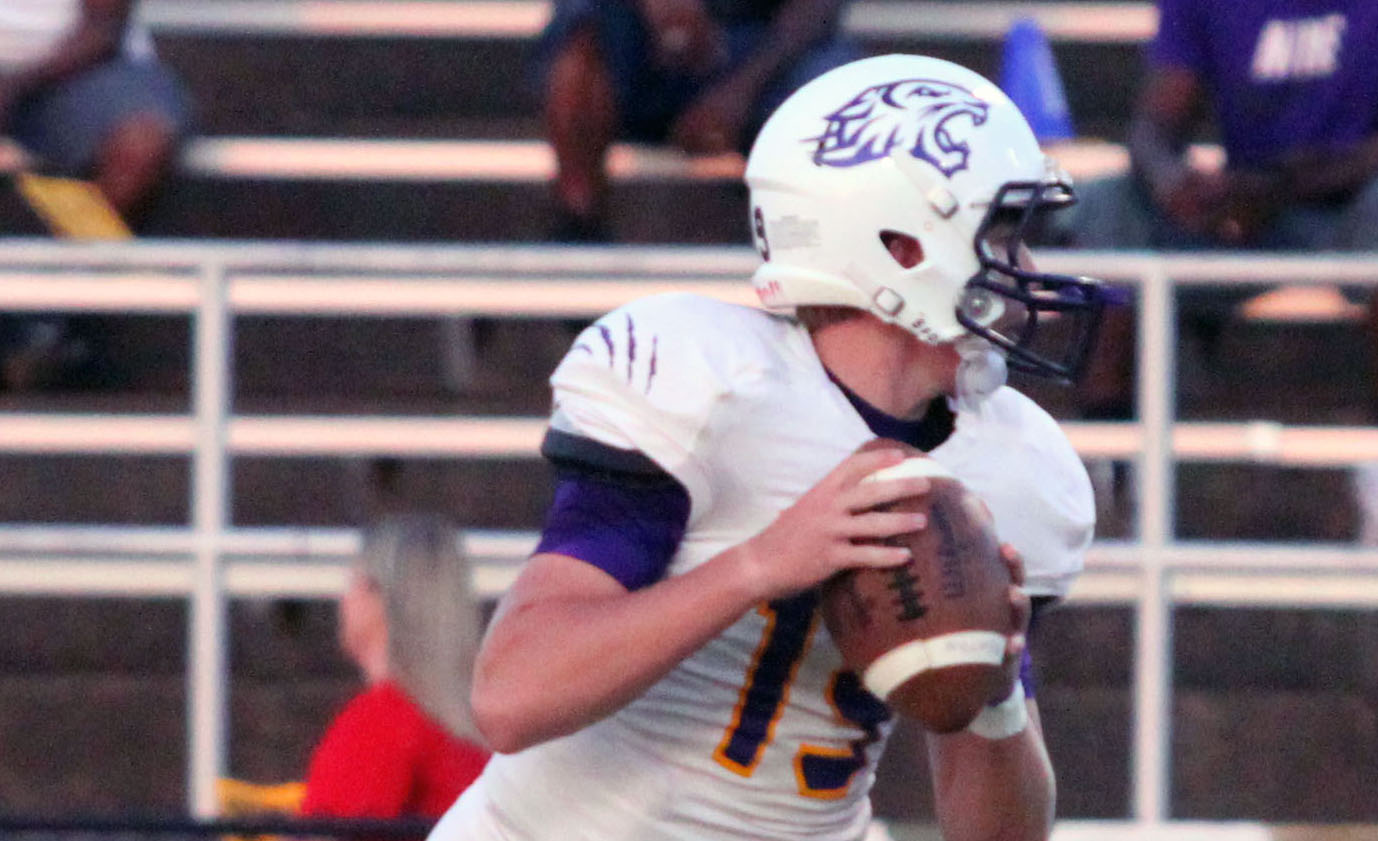 Benton sophomore quarterback Garrett Hable and his receivers put up some big numbers in the Tigers’ 43-36 loss to Natchitoches Central last week.

The game concluded Saturday night after a lightning delay followed by a power outage at NSU’s Turpin Stadium caused the game to be suspended in the second quarter Friday night.

Hable completed 30 of 54 passes for 445 yards and five touchdowns with no interceptions.

Clayton Festavan led the receiving corps with 11 catches for 140 yards and a touchdown. John Westmoreland had five catches for 114 yards and two touchdowns. Doyle Adams had eight receptions for 125 yards. Ian McEntee caught three passes, including two for TDs, for 39 yards.

Hable’s night vaulted him to the top of the state’s passing yardage list. He has completed 52 of 90 for 689 yards and six touchdowns with four interceptions.

In fact, Bossier Parish quarterbacks are 1-2-3 on the yardage list. Plain Dealing’s Matt Sullivan, who had a big night in a win over Lakeside, has completed 42 of 60 for 572 yards and four TDs. Parkway’s Keondre Wudtee has completed 27 pf 53 for 559 yards and five touchdowns.

“We probably got 80 or 100 yards plus just on bubble screens,” he said. “We’d throw it to the inside guy and the other two receivers would block really well downfield. It made it an easy play two call.”

“Festavan had a catch that was about a 5-yard out,” Moore said. “He caught it and cut back inside and then was in a whole gaggle of tacklers. He spun out of it and took it 50 yards before he got tackled.

“Ian and John made some nice catches. We had a couple of screens. It was kind of fun to watch.”

The only negative, Moore said, was some drops. But he was more than happy with the way his receivers performed.

“I can’t say enough about all four of them, how great a job they did with downfield blocking,” he said. “They were tremendous in the passing game blocking for each other. Any time you get skill guys out there being physical and blocking you’ve got a chance to be really good.”

He said McEntee’s touchdown catch was key for both Hable and the other receivers. Hable threw the pass a little behind McEntee, who was running a curl route.

“Ian planted and dove and laid out for it and just made a heckuva catch,” Moore said. “From that point forward, we started clicking. That gave Garrett a lot of confidence in his receivers and gave the other receivers confidence.”

Moore said McEntee’s catch helped Hable realize he didn’t always have to throw it perfectly, that his receivers could make plays.

Moore said Hable, who started about half the season as a freshman last year, continues to improve.

He especially liked the way Hable was able to avoid the rush.

“When he got pressure he did a really good job of stepping up in an open lane,” Moore said. “We worked a lot last week on escapes and where to go with your feet when you feel pressure. He did a real good job whether is was a sprintout or whether it was drop back.”

Moore said Hable kept the ball in a place where he could get rid of it at any moment.

“We really worked on that the last couple of week and he’s really committed to working on it and being better at it. It’s good that he’s got his eyes downfield the whole time. He just continues to get better and distribute the ball. I can’t remember a bad decision except maybe one at the end of the game when we were forced to throw on every down. He was pretty on point with all his passes.”

While the offense was fun to watch, the end result, of course, wasn’t fun for Moore or his Tigers. Benton rallied in the second half and took a 36-28 lead in the fourth quarter. But the Tigers couldn’t hold it.

“We gave up a lot of yards on kick returns,” Moore said. “We’ve got to do a better job. We had a real tough time stopping them on defense. The kid they had at quarterback had been playing receiver for them. We were aware of how good an athlete he was but they moved him to quarterback against us. He extended a lot of plays with his legs and made it real hard for out guys to cover that long. Two of his touchdown passes came off long scrambles.”

The Natchitoches Central game marked the second straight year Benton has had to finish a game the day after it started. Last year, the Tigers finished their game against Woodlawn on a Friday afternoon after it was postponed due to a storm Thursday night.

The good new is no rain is expected Friday night when the Tigers (1-1) host Southwood (0-2).