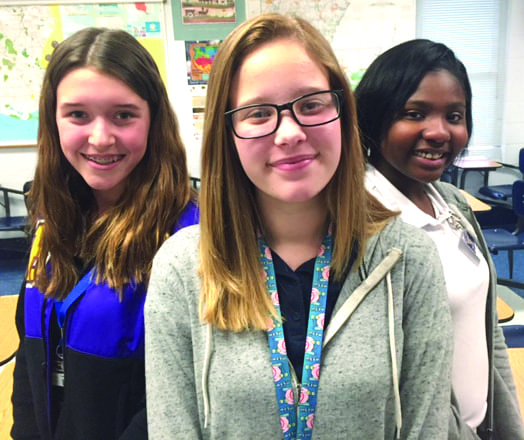 When the 45th President of the United States is sworn in January 19 on the steps of the U.S. Capitol in Washington, D.C., a group of Benton Middle School students will be there to witness it firsthand.

History and Social Studies teacher Jamie East is taking 11 students in sixth through eighth grades on a Close Up trip to the nation’s capitol, where they will be a part of history. The middle schoolers plan to be front and center when President-elect Donald Trump takes the oath of office, followed by the inaugural parade and other events.

The trip was intentionally planned to coincide with the inaugural ceremonies, but before the Presidential election was decided.

The Washington D.C. Close Up Middle School program differs from others, in that it is not simply a tour but an educational experience. Students are given hands-on opportunities to interact with government and history. They will also get the chance to visit historic sites, museums and memorials, examine the roles of ordinary citizens in American democracy and observe government in action.

That is the part eighth grader Ta’mya Davis is looking forward to most.

Yet, the inaugural ceremonies are what most are looking forward to experiencing. What is eighth grader Michael David Johnson anticipating?

“A show. How it all goes down,” he said. Johnson added, “I’m really excited. My mom thought it would be a great experience.”

The magnitude of what they will be a part of is not lost on eighth grader Izabella Arsenault, who said “No matter who is our President, it’s such a historical moment getting to be there in the moment and our children will read about it in history books one day.”

Emily Murphy chimed in, “I’m excited about seeing it in person, not just in a textbook, and meeting people from around the country.”

“This is what I’m excited about. I can’t wait to see them all week long, because I did teach them all this last year,” East said, referring to the trio of Arsenault, Davis and Murphy. “I’ve always wanted to go to an inauguration, but to go with these kids and see what they’re experiencing and learning … that’s what I’m most excited about.”

Oh, and there’s one more thing East is excited to see. She graduated from West Monroe High School and her alma mater’s band will be marching in the inaugural parade.

The Benton Middle School students will be sending photos, videos and impressions on Bossier Schools’ Facebook page the week of January 16-20.