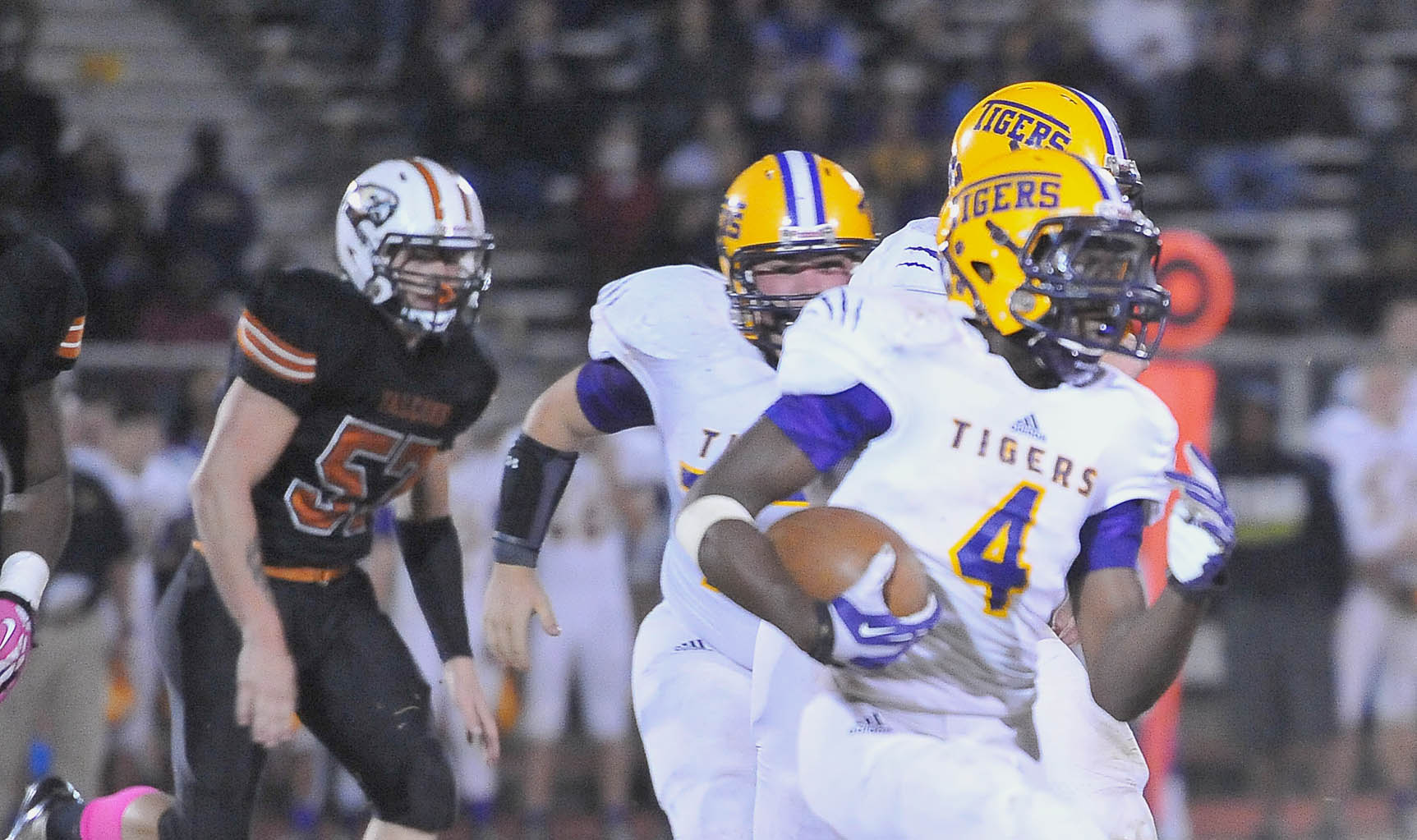 The Benton Tigers are on the verge of winning at least a share of their first district title since 2008 after defeating the Northwood Falcons 36-19 Friday night at Northwood’s Jerry Burton Memorial Stadium.

Benton improved to 7-2 overall and 5-1 in District 1-4A. The Tigers close the regular season against Huntington (4-4, 2-3) next Friday at Independence Stadium.

The Tigers were coming off a tough 25-24 overtime loss to Minden. Benton coach Reynolds Moore was proud of the way his team bounced back.

“I talked to them earlier this year about good teams winning close ones, winning the games their supposed to,” he said. “The measure of a good team and a mature team is one that can take adversity and come back and put it behind them and move on. We kind of challenged them to do that.”

Northwood swept Benton last season, including a close defeat in the first round of the playoffs last season. Moore didn’t let the Tigers forget that.
“We kind of brought up the fact that our season ended on that field, and we didn’t want it to have any kind of adverse affect on us this year as far as our seeding might be,” he said. “We wanted to take care of business. That’s what we had on our mind.”

It took awhile for the Tigers to get going Thursday night.

The Falcons successfully executed an onsides kick to open the game and turned it into a touchdown. The Tigers blocked the PAT.

Benton was forced to punt on its first possession, but the Tigers held and drove for their first touchdown. Freshman quarterback Garrett Hable scored on a 7-yard run and Jordan White’s PAT make it 7-6.

The Tigers led 14-13 when the defense stopped the Falcons just before the half. A screen pass to TJ Anderson put them in field goal position. Jordan White kicked a 38-yarder with 3 seconds left put the Tigers up 17-13.

Brayden Hutchinson’s 2-yard run put Benton on top 24-13 in the third quarter. Hutchinson also caught a 24-yard TD pass from Hable in the first half.

After Northwood cut the lead to five, Hable gave the Tigers some breathing room in the fourth quarter, breaking loose for a 68-yard touchdown. Xavier Washington’s interception set up Benton’s final TD, a 10-yard pass from Hable to Tyler Stephens.

Hable, playing his third full game, passed for 173 yards and ran for 78.

“Hable was very, very good tonight about not forcing anything if it wasn’t there,” Moore said. “He threw it away, and turned it up and ran it a little bit. He was very, very consistent in what he did.”

Turnovers have been an issue for the Benton offense all season, but they weren’t against Northwood. The Falcons didn’t have any and forced four, including three interceptions.

“We finally got back in that habit of forcing turnovers and that was big for us,” Moore said. “The biggest thing for us is if we don’t turn the football over with the way our defense is capable or playing and our offense is capable of getting rolling, we’ll win games. I think turnovers have been the difference not just in our loss last week but also in not moving the ball was well and not scoring as much points in other games.”