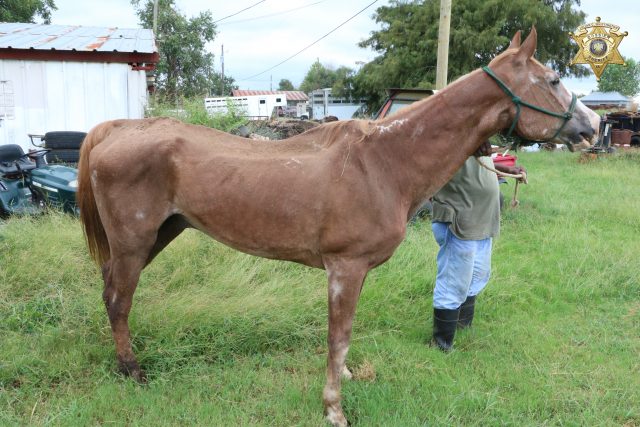 Bossier Sheriff’s Office detectives arrested a Benton woman in the early morning hour of Sept. 21, on multiple counts of aggravated cruelty to animals in her care.

After receiving a tip about some malnourished horses, BSO detectives obtained a warrant to search the property belonging to Sandra Blackmon Driscoll, 52, of the 500 block of Rubicon Road in Benton, which is the horse training center behind Benton Intermediate School. During their investigation detectives say they found three dead horses inside a dump trailer on the property. They also found 13 additional horses living on the property. Investigators say the horses were extremely malnourished and in such dire conditions some were barely able to walk.

Detectives also report the living conditions in the main barn for the animals were deplorable. The stalls were inhabitable, there was very little water available and it appears there were other signs that they have not been fed for quite some time. Eight horses were found in the stalls while two horses and three ponies were found outside the main barn. All the animals were seized and taken to be boarded by a local horse owner.

Driscoll was arrested and charged with 16 counts of Aggravated Animal Cruelty and transported to the Bossier Maximum Security Facility with a $100,000 bond.