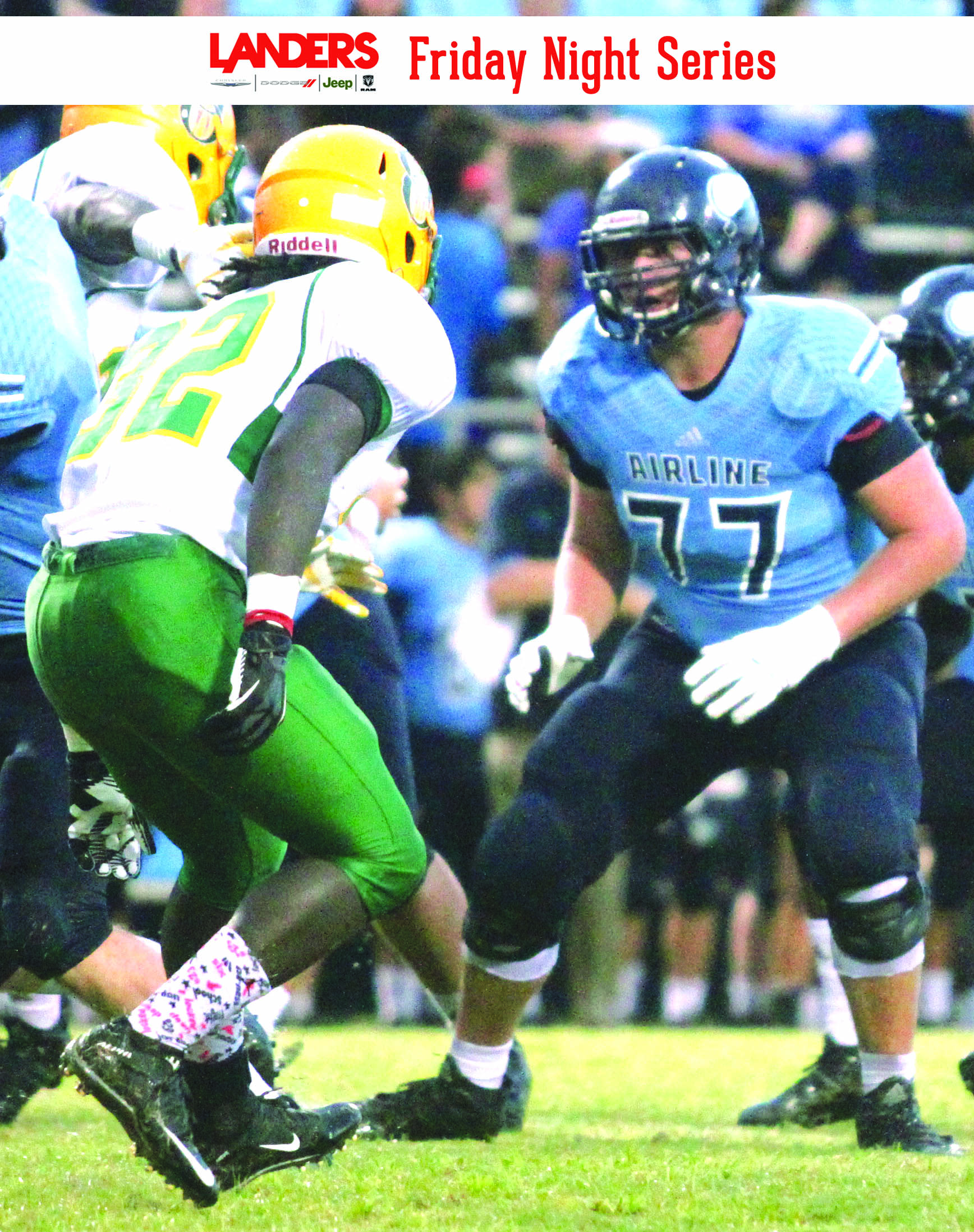 Even back then, Meeks knew that Prater had what it takes to be a special football player. Of course, Prater stood out as 6-foot, 3-inch tall eighth-grader.

But it wasn’t just his size that caught Meeks eye. 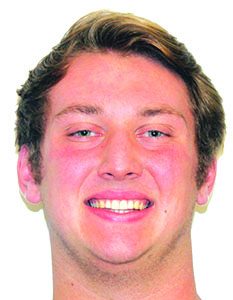 Meeks put Prater on the varsity his freshman season. For the past three years, he’s been a mainstay on the offensive line as one of the starting tackles.

Now 6-foot-4 and 280 pounds, Prater is one of the state’s top offensive linemen. He verbally committed to SEC school Texas A&M in June.

“I’ve been coaching for 16 years and he’s one of the best football players I’ve ever been around, probably in the top three I’ve ever coached,” Meeks said.

Prater and the Vikings are off to a 3-0 start this season. Airline hosts Southwood in a District 1-5A opener Friday night.

Prater has been playing football since his days in BPAR. But he said so far this season is the most fun he’s ever had.

One of the main reasons for that is all of the linemen are seniors. They include left guard Alex Villareal, center Peyton Wilhite, right guard Lane Wiliams, right tackle Chandler Vascocu and tight end Cameron Howell.

Prater said most of the group — along with senior quarterback Thomas McKain — has been playing together since their BPAR days. In middle school, he played with Wilhite and Vascocu at Cope and against Villareal and Williams, who went to Greenacres.

“This is all their first year starting,” Prater said. “It’s kind of nice all these guys that I’ve grown up playing with we’re all starting together our senior year.”

Prater describes the line as a close-knit group.

“We eat lunch together,” he said. “After school we go and find something to eat together. We hang out every weekend. Somebody asked what I would remember most from high school and more than anything probably that group of friends.”

While Prater has gotten his share of attention as one the state’s top college prospects, offensive linemen in general usually aren’t in the spotlight. On the offense, that’s reserved for the so-called “skill” position players like running backs and quarterbacks.

Prater said that doesn’t bother him or his fellow linemen at all.

“I’ve always said it takes a special person to love being an offensive linemen and all that it entails,” he said “I love those people. We’ve got five guys who are completely unselfish. We don’t care about whether we’re in the papers, if its says the O-line did great. We really could care less. We take pride in the fact that we know not many people are watching us.”

Meeks said offensive lines in general are under appreciated.

“That’s OK with the guys on our team,” he said. “They don’t want a lot of the glory. They just want to go play the game together and have fun. It’s unique. I’ve never had a group with five seniors. They’re best friends. Colton’s the ringleader. They deserve praise. They’re really an outstanding group of players.”

With Prater as the only returning starter, there was some question as to how good Airline’s offensive line was going to be. The answer so far is very good.

“There were a lot people going into the season that looked at myself being the only returning offensive lineman and said the O-line’s going to be the weakness,” Prater said. “That’s simply not true.”

Meeks said Prater is a leader mostly by example.

“He’s not a real vocal guy,” he said. “The thing that’s great about that is when he chooses to voice his opinion or speak up everybody listens. And being obviously the tallest guy on the team, he’s kind of like a lightning rod. He handles it well. He’s a great leader. He speaks when he needs to. Otherwise he works as hard he possibly can.”

Prater said he learned how to be a leader from being around the seniors on Airline’s 2012 team that shared the District 1-5A championship and reached the quarterfinals of the playoffs.

“I look back on being around those guys and how they led — even some of the negative leaders,” he said. “I think you learn how to lead from negative leadership sometimes more often than positive. A lot of guys are too vocal. I’m not a guy who talks a lot anyway. I guess you could say I try to lead by example, do the right things. But I try to say something if something needs to be said.”

Prater has two things in abundance that offensive linemen need to be successful — size and strength. But those things by themselves are not enough.

“There are several things,” Meeks said. “Obviously his intelligence is one. One, he’s always where he is supposed to be. Two, he has really good feet. He’s very quick. The thing I think people are really starting to see now is how physical he plays. From whistle to whistle he has a really nasty demeanor on the field which, again, one of things is when you’re ever around him you’d never expect at all. He’s great kid. Between the whistles he plays the game very violently.”

And by violently Meeks, of course, doesn’t mean he’s a dirty player or out to hurt anybody. It just means he’s playing all-out physically.

“I think you have to,” Prater said. “Coach (Brian) Garrett, our line coach, he always tell us Teddy Roosevelt said ‘Speak softly and carry a big stick.’ It’s a violent sport. I’m not saying we’re trash talking anybody. We’re just doing our thing, but we’re out there to win too. It’s a fight every play.”

Prater is the son of Keith and Beth Prater. Keith, who works in the field of nuclear medicine at Christus Schumpert Highland, was a standout center at Southwood who went on to play for Air Force and Louisiana Tech.

When asked if he gets his size from his dad, Prater laughed and said he passed him up a few years ago. From the start of his sixth-grade year to the end Colton grew from 5-9 to 6-3.

His mother is lab director for Promise Hospital, which has locations in Shreveport and Bossier City.

Prater had offers from many colleges and made a visit to TCU last year, but he said Texas A&M is simply the right fit for him. He received the offer from A&M during spring practice.

On Sept. 12, he made his first visit to Kyle Field for the Aggies’ victory over Ball State.

“I think there’s no specific reason,” he said of choosing A&M. “We kind of checked off all the boxes that I was looking for. I saw a lot of other places. They might have had a good atmosphere, liked some of the coaches. But they didn’t necessarily check off all the boxes. A&M is just the full package.

“I trust the coaches there. People say don’t choose a place for the coaches, but I think that’s a lie. I don’t think the coaches that are there now — coach (Dave) Christensen, the offfensive line coach, and (head) coach (Kevin) Sumlin — I don’t that they’re planning on moving on any time soon.”