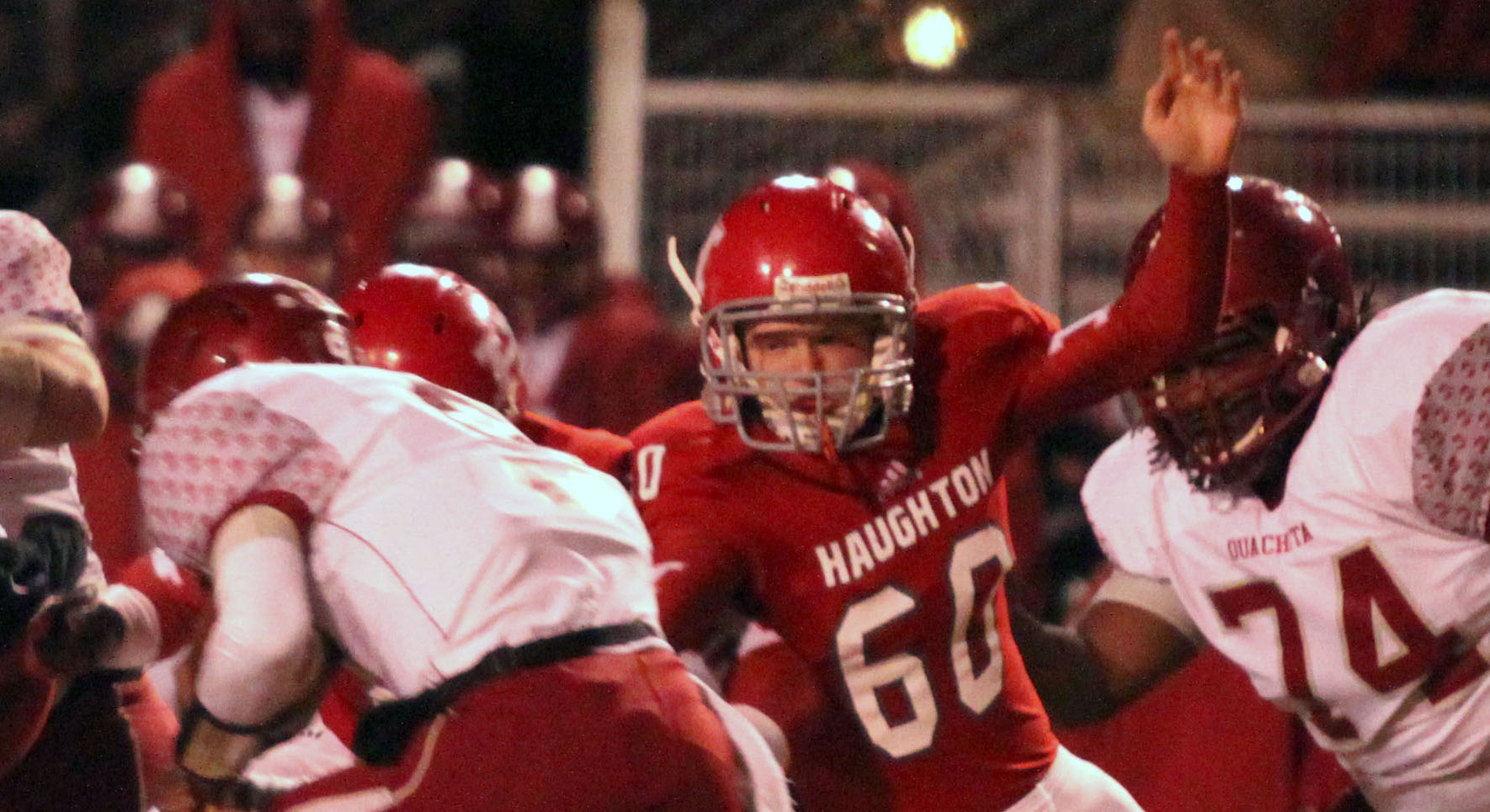 Senior quarterback Will Haines accounted for five touchdowns to lead the Haughton Buccaneers past the Ouachita Parish Lions 34-19 in the first round of the Class 5A state playoffs Friday night at Harold E. Harlan Field.

“We’re excited to be playing at home, I tell you what,” Haughton coach Rodney Guin said. “That’s a big, big deal.”

Haines completed eight of 20 passes for 175 yards and and three touchdowns. He also led the Bucs on the ground with 98 yards on 17 carries and two TDs.

Haines has not accounted for 36 touchdowns in 11 games.

The Bucs had more yards rushing (207) than passing, continuing a season trend, but they made some big plays throwing the ball.

“We thought we could get some big plays on them,” Guin said. “It was just a matter of throwing and catching it. And tonight we did that better than we’ve done in the last few weeks.”

The defense also came up big, making some key stops when the Haughton offense got off to a slow start in the second half.

“It’s one of better games we’ve played in a long, long time, this season or any other season,” Guin said. “We played well all game. We gave them the ball in good position three or four times and kept on holding them in the second half until we got the offense back going.”

The Bucs got off to a fantastic start, building a 20-0 lead. The first touchdown came on a 26-yard pass from Haines to Antonio Woodfork, who made a leaping catch and then broke a couple of tackles en route to the end zone.

Haines’ 1-yard TD run made it 14-0 with just eight minutes gone in the game. Kei’Untre Normandin had a couple of nice runs on the drive, and Woodfork had a big catch.

Early in the second quarter, the Bucs drove inside the Ouachita 5, but the Lions recovered a fumble.

Ouachita moved to the 40 and the Lions decided to go for for on fourth-and-2. The Bucs defense stopped them well short of the first down.

A few plays later, Javonte Woodard made a leaping, 20-yard catch in the end zone for a 20-0 lead with 7:42 left in the first half.

Ouachita finally got on the board with a touchdown with 3:05 left in the half. The Lions had a couple of opportunities to put more points on the board. Haughton’s Jeremiah Wilson intercepted a pass in the end zone. Ouachita also missed a field goal on the final play of the half.

Haughton couldn’t get much going on offense in the third quarter. The Lions made things interesting with a touchdown with 5:12 left, cutting the lead to six.

“We couldn’t get out of a hole in the second half,” Guin said. “We ended up inside our 20 on three or four series. Really the whole third quarter was played on one end of the field. We finally got out of there and we were able to get a couple of big plays and kind of pull ahead.”

Woodard made his second TD catch of the night, a 13-yarder, with 9:17 left in the fourth quarter. Nico Broadway’s third PAT made it 27-13.

Haines broke loose for a 54-yard touchdown run to put the game away with 6:00 left.