Roughly 42,000 acres of giant salvinia have been chemically treated by spraying in the nine years of treatment on Lake Bistineau, according to Jeff Sibley of the state Wildlife and Fisheries Dept.

Sibley gave the information to members of the Bistineau Task Force during the group’s quarterly meeting Thursday at the Webster Parish courthouse. 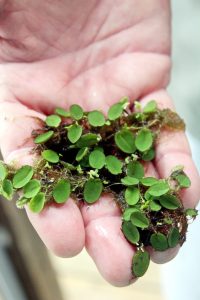 Eradicating the pesky vegetation is something that has to be considered in the past tense, Sibley said.

“It’s like mowing grass…it’s mostly maintenance,” he told Task Force members. “We open the gates and lower the lake to interrupt the growing season. That way we won’t have 17,000 acres of salvinia.”

Currently, contractors are back on the lake spraying areas from four or five boats, Sibley reported. Those crews are working under a 45-day contract.

While contractors are using the conventional spraying method in an attempt to control the spread of salvinia, Sibley said weevils are being tested in five sites along the lake.

BTF member at large Pete Camp pointed out that some areas of the lake that have been 100 percent covered by the vegetation have shown some improvement after weevils were introduced.

“Where there was once a solid mat of salvinia, you can now see water in the canal and gravel pits on the north end of the lake,” he reported.

Task Force members also heard from Steve Micinski, associate professor at the LSU AgCenter, who has been conducting research on a strain of weevil that will be able to handle the cold weather of northwest Louisiana.

“They just don’t seem to do well in the winter conditions of this area,” he said. “We’re spending a lot of time trying to develop a more cold-tolerant weevil.”

As a response to public concern over the spread of salvinia on the lake, the Bistineau Task Force was created in 2009 by the police juries of Bienville, Bossier and Webster parishes in cooperation with Trailblazer Rural Conservation and Development.