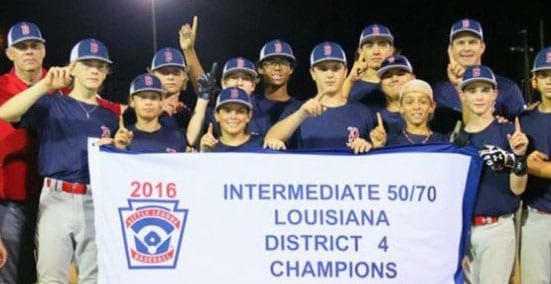 The tournament, which is one step away from the Little League Baseball 50/70 Intermediate World Series, will be held in Junction City, Colo., July 22-26.

Bossier qualified by winning the District 4 and state tournaments.

According to the website littleleague.org, the 50/70 Baseball Division was introduced in January of 2010 as a pilot program for 12- and 13-year-olds. It utilizes a 50-foot pitching distance and 70-foot base paths.

In 2013, 50/70 Intermediate became an official division of Little League Baseball for players league-age 11-13.

Trey Saulters is the manager. Coaches are Aaron Basham and David Szwak.

Anyone who would like to help defray the cost of the team’s trip to Colorado for the regional tournament can go to the team’s Facebook page Bossier Little League All-Stars – 50/70 intermediate baseball 2016 to donate.

The Bossier All-Stars finished runner-up in the Dixie Baseball District IV Machine Pitch Tournament in Minden. Bossier went 4-2 in the event and qualified for the state tournament. The Shreveport Nationals came back through the losers’ bracket to win.

The Benton All-Stars won the Sub-District West AAA Baseball Tournament in Bossier City with a 4-0 record.

The only Dixie Youth Baseball state tournament to be held locally will be the O-Zone event July 22-26 in Shreveport.

NOTE: Coaches and parents may submit photos (team or action shots), team rosters and results of Little League and Dixie baseball and softball district and state tournaments to The Press-Tribune. Email to rhedges@bossierpress.com. Information needed: Age division, site of tournament, place in tournament (champion, runner-up, etc.), first and last names of players and coaches, IDs of people in photos if possible.