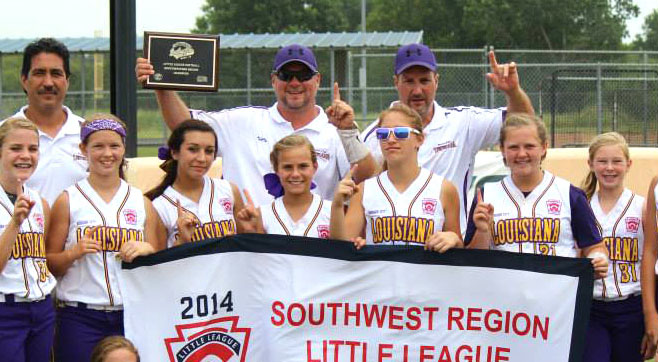 The Bossier All-Stars 11-12 softball team has already reached its goal this summer.
The trip to Portland, Ore., this week for the Little League World Series is simply icing on the cake.
No doubt Bossier wants to represent Louisiana and the Southwest Region well, but the important thing is to have fun and enjoy the experience, Bossier coach Jason Ennis says.
Bossier earned the trip to the World Series by winning the Southwest Regional last week in Waco, Texas.
Bossier defeated host Robinson, Texas. located about 10 miles from Waco, twice 10-6 and 7-0. The latter game was a winner-take-all format for the title.
“Last year, the goal was to get to Waco,” Ennis said. “This year the goal was to win Waco, so we’re going into Portland as this being kind of the reward for our hard work all year.
“We have expectations of doing well, but win or lose we feel like we’ve already done out job.”
There are 10 teams in the tournament from the U.S., Canada, the Czech Republic and the Philippines.
Bossier is in Pool B with Canada, U.S. East (Robbinsville, N.J.), U.S. West (Chico, Calif.) and the Phillipines.
Bossier opens pool play Friday at 6 p.m. against Canada.
The top two teams in each pool advance to the semifinals.
“I think the pool we’re in is the strongest pool,” Ennis said. “East and West are always going to be pretty strong teams.”
Ennis said it has taken a true team effort to win district, state and regional tournaments.
Ten players made the trip to Portland — Brooklyn Brandon, Caroline Easom, Hannah Borah, Jessie Baffuto, Kourtnee White, Lexi Gray, Madison Ennis, Makenzie Chaffin, Raelin Chaffin and Reagan Jorstad. Reagan Thompson wasn’t able to go because of school responsibilities.
Bossier hit .488 as a team in the regional tournament.
“We’re strong on every side,” Ennis said. “We’re strong on defense. We have the offensive sticks and we have the pitching that keeps them on their toes.”