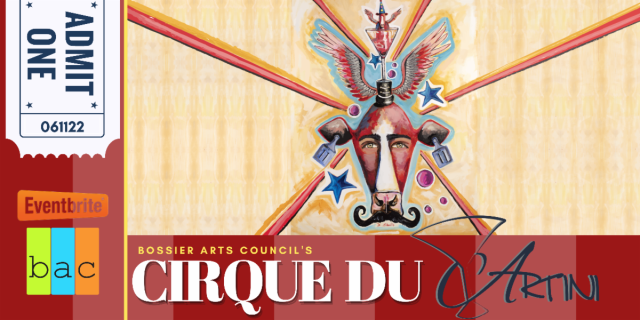 The Bossier Civic Center will be transformed into a Big Top Experience for the 12th annual ARTini. This fundraiser for the Bossier Arts Council will take place on Saturday on June 11th at 7pm.
ARTini celebrates various forms of creative expression and encompasses the culinary, musical, and visual arts by having local mixologists create signature martinis and compete for for the coveted title of “Judges Choice,” “People’s Choice,” and “Most M’artisanal.”
The funds raised from the event support the Bossier Arts Council’s programming, local artist advancement support, and community outreach projects for the entire year.
﻿
Tickets to this event are $75 and include entrance to the event, a hand-painted Martini Glass, Live Music, Circus Performers, Fire breathers, stilt walkers, jugglers, and aerial performers. delicious catered food, and over 20 different Martinis.

Our 2022 Featured Artist is Lisandra Di Liberto Torres. She has spent several years building a portfolio that reveals a mixture of reality and fantasy. She may be best known for her series of red cows with wings that she paints. They are a favorite subject for her because of the town in which she grew up in Puerto Rico, which is a center for the country’s milk production.
“We say that Hatillo has 38,000 people and 32,000 cows,” jokes Di Liberto!

The Hollow Decks, will be rocking out at Cirque du ARTini 2022!
Consisting of Gregg Gregory on Vocals & Bass, Ben Tynan on Vocals & Guitar, Adam Pike on Drums, and Dexter Duran on Vocals, Guitar AND Harmonica, The Hollow Decks show spotlights all the hits and flashes in the pan from the ‘90s as well as sporting ‘90s fashion, with a witty repartee of jokes and references to the best decade of pop nostalgia for this generation of adults!

We are so very proud to announce that the 2022 Mover and Shaker award goes to Vanessa Lee Hackleman! Vanessa has lived in the Shreveport Bossier City area since 1993. Her husband (fiancé at the time) Chris, was stationed at Barksdale Air Force Base. He has since retired after 27 years of service & continues to work as a civilian employee at BAFB. Their roots have grown deep for the area & a love for the culture.