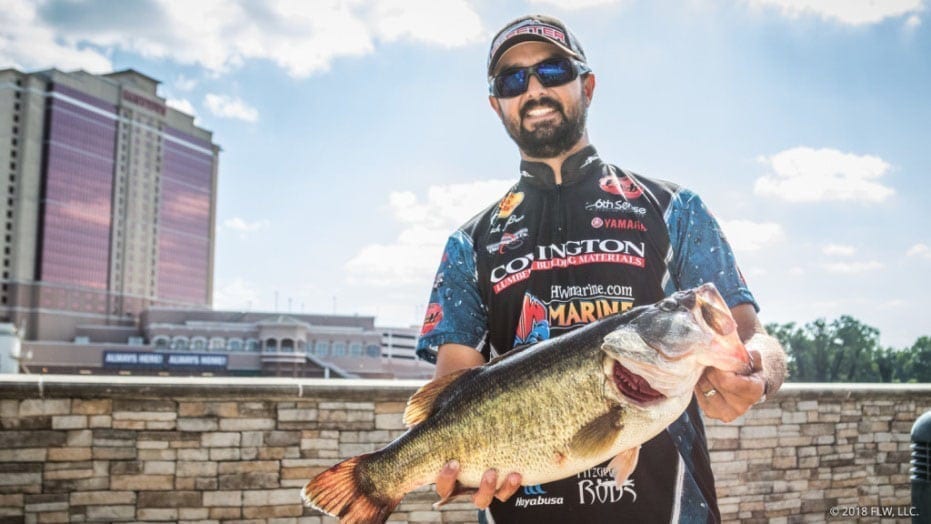 LeBrun will begin day two of the three-day competition with a 3-pound, 13-ounce, lead over Adam Wagner of Cookeville, Tenn., and Chris Daves of Spring Grove, Va., who are tied for second place after each weighing five bass good for 22 pounds, 12 ounces.

The BFL All-American features 98 of the best boaters and co-anglers from across the 24-division T-H Marine BFL circuit casting for cash prizes of up to $120,000 in the Boater Division and $60,000 in the Co-angler Division. In addition to the six-figure payout, the top boater will receive an invitation to compete for bass fishing’s most coveted prize — theForrest Wood Cup — held Aug. 10-12 on Lake Ouachita in Hot Springs, Ark.

“I’m thrilled to be leading this big of an event right here at home,” said LeBrun, who qualified for the tournament through the BFL Cowboy Division. “It’s only a 49-boat field, but these guys are the best anglers from across the BFL. I can’t let off the gas because I know they’re going to catch them again tomorrow.”

LeBrun’s 26-pound showing was anchored by an 8-pounder that he caught early this morning. Not only was it his first bite of the day, but it also became part of a special tradition that LeBrun has started this year.

“I ran to my spot, settled down and got in the groove. I hadn’t gotten a bite, but at 8:30 (a.m.) that fish slammed my bait,” said LeBrun. “We got it in, and every time I catch a big one now in a tournament I thank my Dad, who passed away in February. I think he’s kind of watching over me. I say ‘this is for you Pop’. It was pretty cool to do that this morning.”

LeBrun said he has two main patterns for this event, with his primary pattern producing the majority of his weight Thursday.

“I didn’t get very many bites, but when I did they would be the right quality,” said LeBrun. “I decided to kind of ease off of them at 10:30 (a.m.) I had around 23 pounds and went and fished stuff that I hadn’t ran before. The pattern that I’m on is pretty unique. I felt like I could take it and just kind of run with it. I went to an area I hadn’t been to before, and caught another 5-pounder at 12:30 (p.m.).”

LeBrun said that while he’s happy to have the weight he did on Thursday, he’s also realistic about how quickly conditions can change.

“I’ve got two ways to catch big ones, but I wish I had three. Cross Lake can change overnight and humble you quick.”

The top 10 boaters after day one on Cross Lake are: