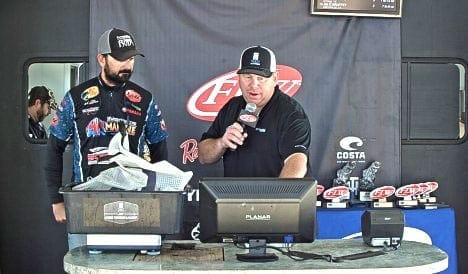 As a competitive bass angler, Nick LeBrun doesn’t want to give away all his secrets on how to catch big fish.

But the 33-year-old Bossier City resident doesn’t mind giving some of his expertise to other anglers.

LeBrun is teaching his third course in BPCC’s Workforce and Continuing Education series Thursday from 7-9 p.m. at the Margaritaville Resort Casino Theatre.

“Teaching is something I love to do,” said LeBrun, who is fishing in the American Bass Anglers Ray Scott tournament this weekend on the Red River. “I love kind of passing on knowledge.

“You’ve just got to be careful not to pass on too much knowledge sometimes, but I do love educating, especially young people. I never claim to be an expert on anything but I do like showing people the way I do things. They can kind of take that and make their own out of it.”

“The thing is a lot of people go and buy the fancy, high-tech equipment, meaning depth finders and graphs,” LeBrun said. “But they’re kind of uncertain on what they’re looking at or they may not know how to use the equipment properly.”

This class will help them “just interpret what they’re seeing on the screen and how to properly set up and ultimately find fish and catch them,” LeBrun said.

The cost of the course is $49. To register for it, visit www.goo.gl/FQWWVP. For more information contact BPCC’s Workforce Development and Continuing Education office at (318) 678-6015.

LeBrun has been fishing in tournaments since the early 2000s, starting with mainly local events.

In 2011, he started going to bigger tournaments on lakes like Sam Rayburn and Toledo Bend. Since then, he has fished on a variety of circuits.

“I’m a local, regional type guy,” LeBrun said. “I don ‘t consider myself to be at the top by any means. But I’m 33 years old and I feel like I’ve got a lot of potential and a lot of opportunity ahead of me. That’s how I like to put it.”

LeBrun has had some success. According to his profile on the FLW website, he has career earnings of $65,844. He has won two tournaments and posted 14 top-10 finishes.

LeBrun is the owner of LeBrun Outdoors, a rep group for the outdoors industry. According to its website, LeBrun Outdoors “provides product representation to dealers across several territories, while staying up to date on the latest and greatest products in the outdoor industry.”

LeBrun said he is able to fish in about two tournaments a month on average.

His wife, Jolene, works in medical sales. They have twin boys, 18-months-old Jaxson and Jayce, who also keep them busy.