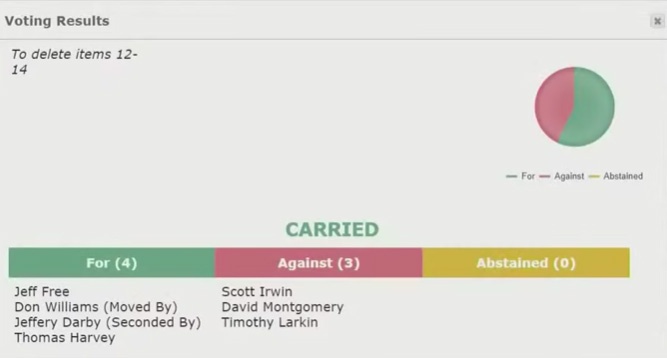 Montgomery then asked, “Any questions from the audience, any discussion from the council?” Irwin replied to Montgomery’s question by asking, “Why are we deleting these?”Williams replied to Irwin’s question by asking, “Which one?” Irwin replied, “Uh, specifically 12.” Williams replied to Irwin’s question by saying, “Uh 12, well, you know we haven’t had a lot of information on it. Nothing has been sent down really from the administration or anywhere else. It is something we talked about two years ago and all of a sudden it shows up on the agenda. I mean, I’m not for spending 30 million dollars right now.”

Williams continued, “There’s a lot of other things. Do we know who’s going to run it? Do we know who’s going to contract it out? There’s a lot of issues,” Williams added. At that point, Bossier City Councilman At-large Tim Larkin addressed the council and asked, “Should the items should be deleted from the agenda or should there be a discussion on the agenda items in question?” Williams commented, “Just delete them from the agenda. And, I would ask that we sit down over the next week or two and we talk about it and go through this whole contract. Give us a chance to ask questions.”

Montgomery then asked Williams, “So, you wouldn’t be for introducing it and having a discussion and continuing?” Williams replied, “No.” When it came time to vote on deleting the three specific agenda items, District 3 councilman Don “Bubba” Williams, District 2 councilman Jeff Darby, District 4 councilman Jeff Free and District 5 councilman Thomas Harvey voted to delete the items. At-large council members Montgomery and Larkin, along with District 1 councilman Scott Irwin, voted to keep the agenda items for discussion at Tuesday’s meeting. Agenda item number 12 concerned the introduction of an ordinance to appropriate thirty million dollars from various sources in order to construct the Bossier City Recreational Center and Senior Center.

-Adoption of a zoning classification change ordinance for a tract of land for Brookshire Grocery Company located at the southeast corner of Airline Drive and Wemple Road.

-Adoption of a resolution authorizing the hiring of two police officers for the Bossier City Police Department.