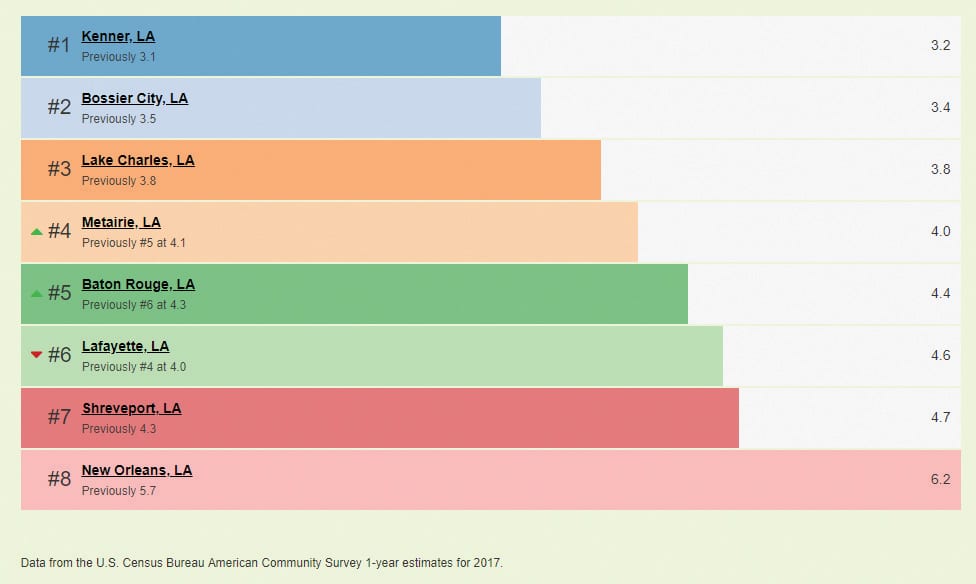 Bossier City ranks No. 2 in the state for affordable housing, according to a new study.

HomeArea.com compiled the latest estimates from the American Community Survey conducted by the Census Bureau for all cities in Louisiana with a population of 60,000 or more with sufficient data to estimate the median multiple.

Out of the eight metro areas analyzed, Bossier City ranked second-most-affordable, behind Kenner.

“To determine housing affordability, we compare local home prices with local incomes,” the survey said. “The median multiple answers the question, ‘how many years would it take for the median income to pay off the median home price?’”

Allyson Smith, a real estate agent with Diamond Realty, says the overall our market has been fairly steady and balanced over the past several years, which makes the market fair for the buyer and seller.

“The lowest priced house on the market in Bossier City is $24,900 and the highest priced home is $949,000 — quite a wide range. This year, there have been 87 homes in Bossier City sold with and average sold price of $185,825,” said Smith. “Overall in northwest Louisiana, we have had a 5-percent increase in the number of homes sold. So, yes, I do believe more people are buying.”

Lower values indicate that incomes in the area are high enough to make it easier to pay off a home. Anything under a multiple of three is considered affordable, the study concludes.

Overall, the Louisiana median multiple from the latest estimates is 3.5 and has risen 0.6 percent.

“The cost of living is reasonable, we have good schools and multiple colleges nearby with BPCC, Centenary, LSUS locally. and then Northwestern, LA Tech, Grambling and ULM within easy driving distances,” said Smith.

Bossier City couple and first time home owners Dana Soper and Michael Bradford say Bossier City is a great location to live if you want that small town with a big city feel and it is centrally located to nearby bigger cities.

“Bossier City has friendly people, good schools, a low crime rate and it’s clean. There is also plenty to do in our area with casinos, festivals, the racetrack, great food establishments, plenty of shopping, etc,” said Soper.

“And if you want to get away for a long weekend or something Dallas, Houston, New Orleans, Jackson and Little Rock is just a short drive away,” Bradford added.

This year saw several big changes, according to HomeArea’s study. Metairie rose from No. 5 to No. 4, Baton Rouge rose from up a spot from No. 6 to No. 5, and Lafayette fell from fourth to six.

And Lafayette saw the biggest percentage increase in median multiple at 14.2 percent, while Bossier City saw the largest percentage decrease at -3.8 percent.

In 2018, Money magazine choose Bossier City as the top place to live in Louisiana.

“Located on the eastern bank of the Red River, just across from Shreveport, Bossier City is home to Barksdale Air Force Base and has in recent years become one of fastest-growing urban centers in the state,” the Money article says. “Bossier City has attracted new residents with ongoing infrastructure improvements, a low cost of living, and rich local culture — various music and culinary festivals take place in the area throughout the year.”

The magazine says its “best places” selections are based on locations that “pair strong economic and educational performance with affordability, and then ticks other boxes as well: convenience, safety and a pleasant way of life.”