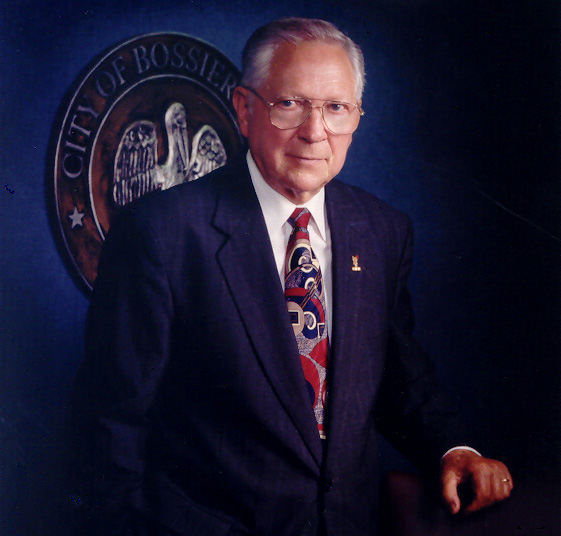 A love for people and the city. That’s how many people will choose to remember former Bossier City mayor George Dement.

Dement passed away at his family home in Frierson on Sunday, aged 91.

The highly visible and popular figure served four terms, from 1989 to 2005, overseeing many improvements and success.

Dement came into office at a time when Bossier City was hurting, and by the time he left 16 years later, it was on the cusp of becoming the growing city that many citizens will recognize today.

“I ran against Mayor Dement in 1989 and, obviously I lost, but I had the good fortune of him selecting me as his Chief Financial Officer and public assistant and I enjoyed the 16 years we worked together. I think there were a lot of improvements made for this city during his tenure and he was one of the most people-friendly and caring individuals I’ve known. He will be sorely missed by this community,” said Bossier City Mayor Lorenz “Lo” Walker.

When casino gaming came to town in 1993, Dement jumped at the chance. The city reaped the benefits of revenues from three casinos.

The construction of the Arthur Ray Teague Parkway, CenturyLink Center, a new water treatment plant, and the city’s $40 million contribution to the Louisiana Boardwalk can all be traced back to those funds.

Beyond the major visible improvements Dement oversaw during his tenure as mayor, he also made time to make a number of improvements from citizen requests and often drove around Bossier City to take stock.

“He was a guy who knew how to get things done. He wasn’t hands-on, in the middle of things, but he made sure the goal was accomplished and he did a lot for Bossier City,” said Bossier Sheriff Julian Whittington, a family friend. “The community is going to miss him.”

Born Jan. 23, 1922 in Princeton, a graduate of Elm Grove High School, his first job was delivery boy for the Barksdale Drug Store. After being promoted to soda jerk, that is where he met Sunshine Norris, his future wife, by spilling a chocolate shake in her lap.

They were married after he returned from a five-year Naval service during WWII and were married for 64 years until she passed away in 2011.

Before becoming mayor, Dement worked in the restaurant business for 20 years. He began his career by opening a hot dog stand after returning home from the war. He then worked his way up to run the Holiday Inn Restaurant.

“One thing that always impressed me was I always felt encouraged by him. He was a great storyteller and always had a story to tell. I always left meetings wishing I could be just like him. I left feeling like I had gained more knowledge than what I started with.

He was a great encourager to others. Everyone loved him,” said Jane Smith, former Bossier Parish School Board Superintendent and state representative.

Dement’s journey to office began when mayor Don Jones said he wouldn’t be seeking another term. Local news posed the question “Who would even want to be mayor of Bossier City?” Then his wife, Sunshine, heard from another room, “Well, I would.”

After receiving phone calls of support, George hit the streets with Sunshine at his side. His victory belied what would be a very successful tenure.

In fact, Dement is tied as the longest serving mayor of Bossier City. Hoffman Fuller also served four terms in 1937-53.

And his enthusiasm for his position never waned. He told a Central Park Elementary School class shortly before he retired, “It’s wonderful. It’s the best job anyone can ever have because you can help people.”

Long-serving media member and Talk of the Town Publisher/Radio Host Tom Pace covered Dement’s career for many years. He said Dement was a friend to everyone.

“He was a true Southern gentleman. He never had a harsh word to say for anybody, he was always kind to me when I wanted to talk to him and always took the time. He always treated you with respect and you don’t always find that in people of power and fame,” said Pace.

Among the infrastructure and visible impact Dement made while in office, his administration also instituted a 20-year traffic plan to address congestion, which saw the beginning of the Benton Road overpass, widening of Hamilton Road and Traffic Street, and more. The city’s operating budget was more than twice what it was when he came into office.

Throughout the accolades thrown his way, Dement was humble about taking any credit. He often credited any success to the work of his department heads and the city council.

“We’ve got some of the most capable employees, and at decision making time they have been able to work with the city council to get things accomplished,” Dement told the Press-Tribune in 2005.

Funeral services for Dement will take place today at 10:30 a.m. at First Baptist Church of Bossier, 2810 East Texas St. Visitation will be held from 8:30 a.m. to 10:30 a.m. on the day of the funeral. A graveside service will take place at Evergreen Cemetery in Frierson. The Bossier City Police Department, Bossier City Fire Department, Bossier Parish Sheriff’s Office and Bossier City Marshal’s Office will assist with the services and escort to the cemetery.