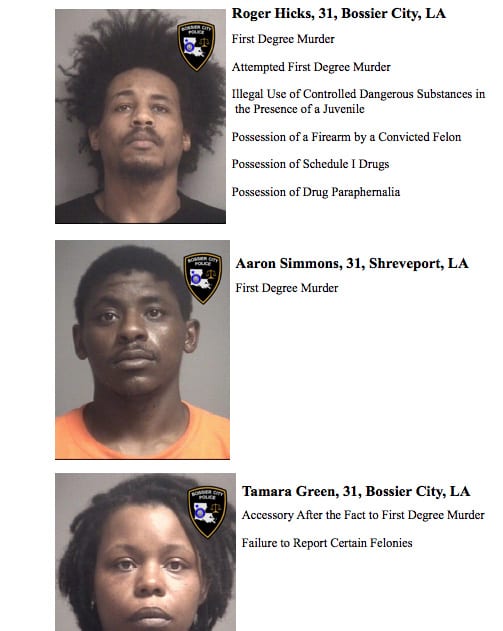 In the early morning hours of January 17, 2020, Bossier City police found Sheniquel Sade O’Neal shot to death in her vehicle that had crashed on I-220 near Airline Drive. She was 29 years old. Less than two weeks later, on January 30, 2020, a young girl sustained a gunshot wound to the leg after shots were fired into a residence in the 5000 block of Honeysuckle Lane in Golden Meadows.

After over a year of investigation into the homicide and shooting, Bossier City police detectives announce the arrest of Roger Hicks for both crimes. Hicks faces a list of charges including first degree murder and attempted first degree murder. Detectives developed Hicks as a suspect in the shooting on Honeysuckle Lane and arrested him on three counts of attempted first degree murder in late February of this year. There were three people in the home at the time of the shooting. Investigators then linked Hicks to the homicide. Detectives also arrested Aaron Simmons for first degree murder and Tamara Green for accessory after the fact and failure to report certain felonies for their involvement in the murder. Both crimes are suspected to be the result of an ongoing feud involving illegal drugs. Hicks total bond is set at $11,775,500. Simmons bond is set at $3,500,000 and bond for Green is set at $175,000.

Sheniquel O’Neal’s murder had been the one unsolved homicide in Bossier City for the year 2020. The arrests are the result of detectives’ determination to solve the crimes. Both investigations are ongoing and additional arrests are possible.