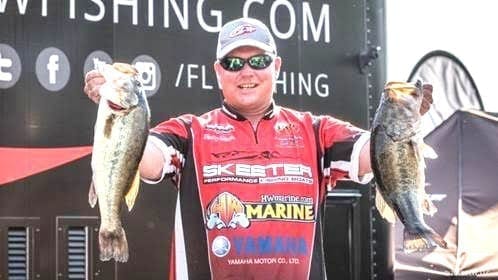 The BFL All-American features 98 of the best boaters and co-anglers from across the 24-division T-H Marine BFL circuit casting for cash prizes of up to $120,000 in the Boater Division and $60,000 in the Co-angler Division. In addition to the six-figure payout, the top boater will receive an invitation to compete for bass fishing’s most coveted prize – theForrest Wood Cup – held Aug. 10-12 on Lake Ouachita in Hot Springs, Arkansas.

“I basically have a couple of different deals going on out there – running cypress trees and docks,” said Deaver, who is fishing in his first career BFL All-American. “Tomorrow I may go to some offshore stuff that I found late in the day today, but that’s pretty much it. I am winding a little bit, but the main thing I’m doing is flipping.”

Deaver said he fished specific areas of cypress trees on the west end of the lake, and key stretches of trees and docks on the main lake.

“This morning I went to some areas that I fished yesterday and had a couple of key bites,” said Deaver. “I lost one that was probably a 4-plus pounder. I came back an hour later and I’m pretty sure she bit again, but I lost her. I moved along and a few minutes later, in the same tree I caught a 5-pounder yesterday, I caught a big one to get the day started.”

Deaver said his day was highlighted by the fact that he was able to apply tactics he discovered late Thursday.

“I was in one of my key areas and did something that I figured out yesterday and caught one that was about 5¾ pounds around 12:30 (p.m.). That was a confidence builder,” said Deaver.

Deaver said he caught eight keepers Friday, adding that his bite seems to be dependent on weather conditions – an important factor heading into Championship Saturday.

“I need the sun to shine,” said Deaver. “It was pretty cloudy this morning, and I don’t think the fish are positioned right until the sun comes out and it gets hot.

“I’ve got some stuff that I’ve been saving that I’m going to try and run tomorrow. Hopefully, Lord willing, I can get a decent limit before I go try to do some stuff that’s a little unique for here.”

The top 10 boaters advancing to the final day of competition on Cross Lake are:

Jesse Parks of Avondale, Ariz., held the lead in the Co-angler Division Friday with a two-day total of 10 bass weighing 26 pounds, 4 ounces, followed by Mike Allen of Crystal Springs, Miss., in second place with 10 bass weighing 25-12.

The final 10 co-anglers are:

The 2018 BFL All-American on Cross Lake is being hosted by the Shreveport-Bossier Sports Commission.

Television coverage of the 2018 T-H Marine BFL All-American at Cross Lake will premiere in high-definition (HD) on NBC Sports Network Aug. 1 from Noon to 1 p.m. EDT. The Emmy-nominated “FLW” television show airs on NBCSN, the Pursuit Channel and the World Fishing Network and is broadcast to more than 564 million households worldwide, making it the most widely distributed weekly outdoors-sports television show in the world.

The 2018 BFL is a 24-division circuit devoted to weekend anglers, with 128 tournaments throughout the season, five qualifying events in each division. The top 45 boaters and co-anglers from each division, along with the five winners of the qualifying events, will advance to one of six regional tournaments where they are competing to finish in the top six, which then qualifies them for one of the longest-running championships in all of competitive bass fishing – the BFL All-American. Top performers in the BFL can move up to the Costa FLW Series or even the FLW Tour.