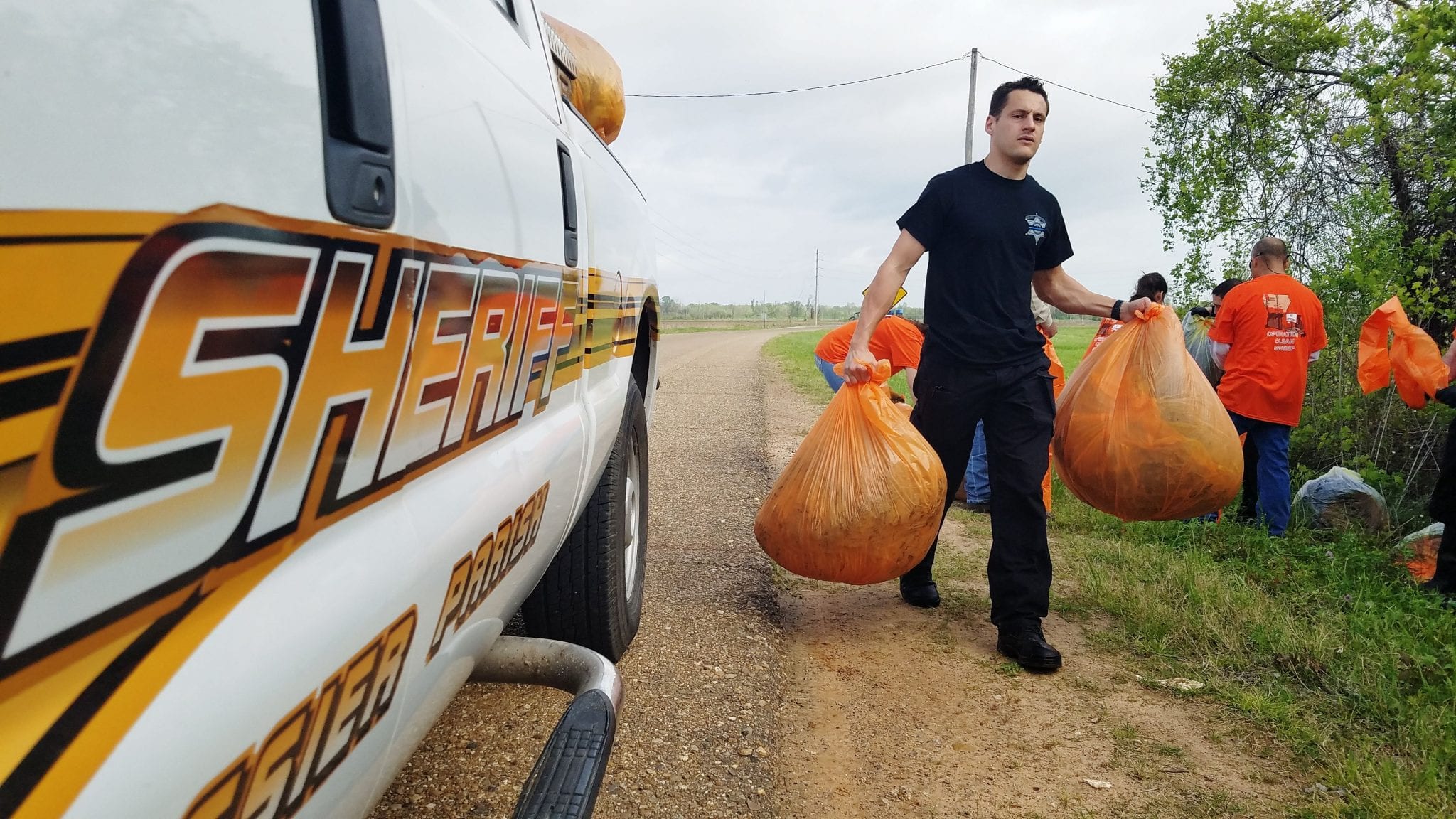 Sixty volunteers with the Bossier Sheriff’s Office donned gloves and carried trash bags to eight locations throughout Bossier Parish to pick up a whole lot of trash on Saturday morning with “Operation Clean Sweep.”

The team of deputies, staff, family members, Bossier Sheriff’s Young Marines, and members of ‘Keep Bossier Beautiful’ picked up and collected 163 bags, seven tires, two sofas, two pedicure chairs, one shopping cart, one television, two car bumpers, and much more trash from places in the parish, including a whole trailer-load of tree trimmings from the NW Louisiana War Veterans Home.

The group met at the Viking Drive substation at 8 a.m. Saturday, and Bossier Sheriff Julian Whittington encouraged the team with a few words before they fanned out into the community.

“The goal is to clean up and make it look nice,” said Sheriff Whittington.  “And when people see you out and about, maybe it will inspire them to go clean up their street and their neighborhood.”

Chief Duane Huddleston and his crew cleaned an area off Highway 3 just north of I-220.  “We’re just having fun trying to make it look nicer for everybody,” he said. “We all live here, and we all should take part in keeping it looking nice.”

Lt. Amy Pope was joined by her son, and she takes pride in her community.  “I live here, and I don’t want to see theses areas with a lot of trash,” she said. “Like the Sheriff said earlier, hopefully if other people see us picking up, maybe other groups will think they could do it.”

Other deputies were also joined by their family members Saturday morning. Two sons of Capt. Joey Cleveland joined their dad in the cleanup effort, something he feels is more than just about cleaning up…it’s also about building character.

“It’s a proud moment,” said Capt. Cleveland.  “We’ve done this a few years, and in doing something together for the community, hopefully we’re instilling good ideas in other people as they pass by.  We’re proud of our community, and we want to keep it clean.”

Sgt. Michele Christine echoed the same sentiments, as her son tagged along to help with the cleanup.  “I brought my son with me,” she said.  “He needs some community hours for Honor Society for school, but we’ve been doing this long before that.  It’s about the fourth time he’s come out with me.  Keeping it clean.”

After a couple of hours of picking up trash, the teams brought all the bags and debris back to the substation and tossed it into a large roll-off dumpster provided by Waste Connections, Inc.

“It’s a community effort,” said Sheriff Whittington.  “We need everybody’s help in this.  We live in a great place, and let’s keep it clean.”