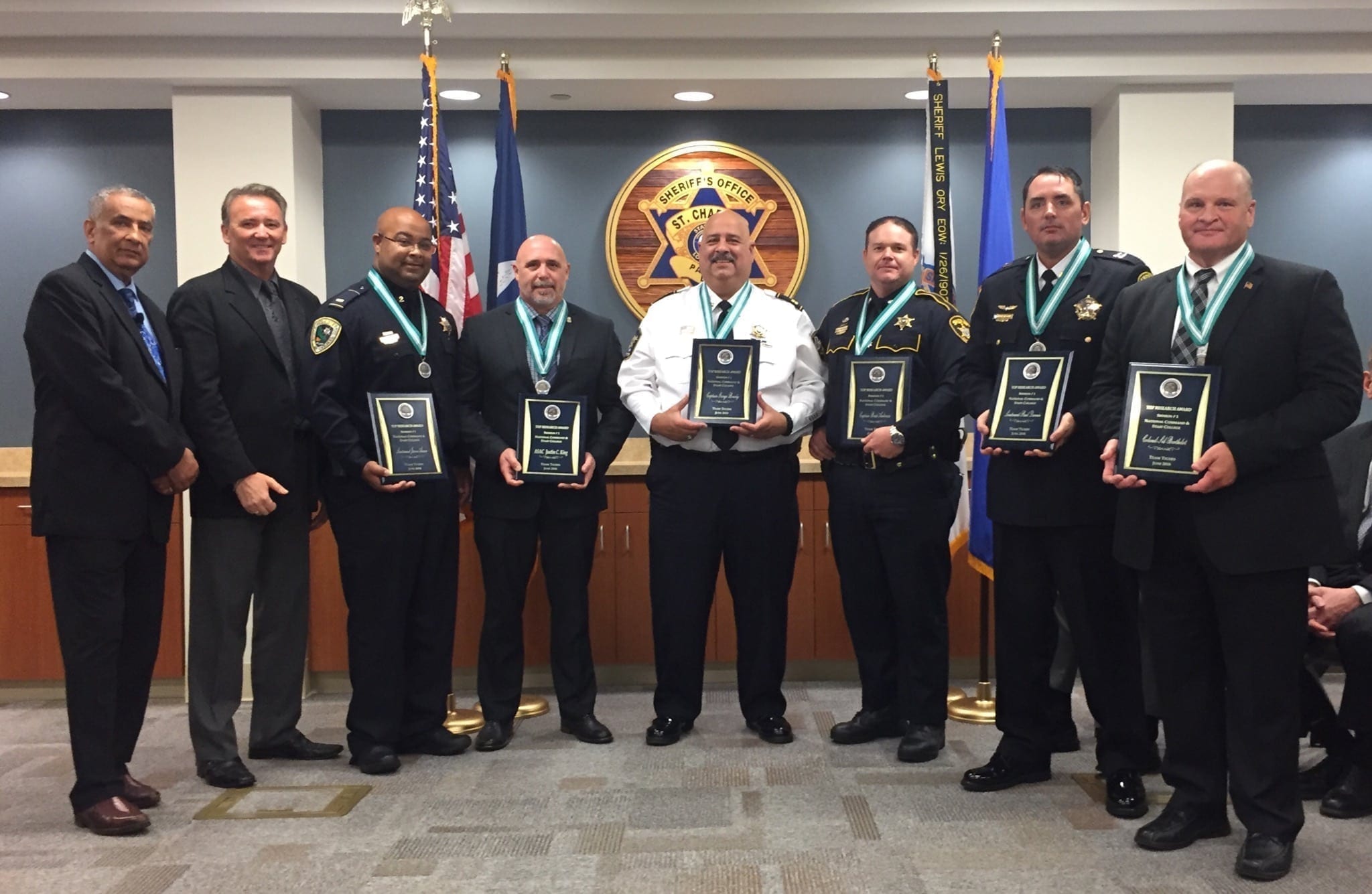 Two Bossier Sheriff’s Office deputies recently graduated with 32 other law enforcement leaders from Louisiana and other states in the inaugural Command and Leadership Education Program with the National Command & Staff Command during a ceremony in St. Charles Parish.

Capt. Brad Anderson and Lt. Sarah Rhodes of the Bossier Sheriff’s Office joined the other senior level executive graduates of the comprehensive eight-week training program who were from various city, parish and county, state and federal law enforcement agencies at the ceremony on June 15.

“This was a tremendous class for the future of our agency and the future of our leadership within the agency,” said Capt. Anderson, who has a combined 15 years of law enforcement experience with the Bossier Sheriff’s Office and Bossier City Police Department.  “A lot that we learned is going to benefit us and the agency in the future, and the valuable information that was taught to us is the best I’ve ever had.”

Capt. Anderson’s group of six leaders received the Capstone Research Award, signifying the highest team score of all the graduates.  The Airline High School graduate was quite elated to receive such an honor, but he also realizes the significance of his impact as a leader.

As the warden at the Bossier Medium Corrections Facility, Capt. Anderson says that since he is in the middle of his career here at the Bossier Sheriff’s Office, it’s up to him to mentor the deputies and staff of the future.  “The training they taught us in the mentorship program is that you’ve got to invest in your people and the future of your agency.”

For Lt. Rhodes, who’s been with the Bossier Sheriff’s Office for nearly 10 years, it’s about adopting a new leadership mindset, “learning to think outside the box, learning to use different leadership tactics and thinking about things from a different perspective.”  Some of those things included looking at things from a pro-active communication approach and learning the importance of talking to people.

“We’ve always learned that way of leadership, but it’s learning different methods on how to speak to folks and truly listen to them, and in return, it’s extremely important to not only be worried about what you’re going to say next,” said Lt. Rhodes, an instructor at the Bossier Parish Sheriff’s Training Academy.

“Another example is looking at things from a restorative policing mindset of not just teaching deputies how to throw people in jail, but how can we also better our community in the same token,” she said.  “What are some ways we can talk to people and try to help people come up with solutions on their own so maybe they don’t go to the criminal element” were examples of such restorative policing.

Lt. Rhodes, who already holds a bachelor’s and master’s degree, also excelled in the class and received the Award of Excellence, graduating as the top leader in the class, which incorporated an intensive six-week “online” and two-week “residential” leadership program.

“This meant a lot, and it came with a lot of effort,” she said.  “I put my heart and soul into every essay and every case study I wrote and followed the directions to a ‘T’.   I wanted to get the most out of this course as I possibly could and was really fortunate that my effort paid off.”

And there was much to cover in just eight weeks – reading seven books, participating in more than 6,372 hours of course lectures, and writing 48 essays each with case studies, discussion questions, and classroom simulations.  There were a total of 62 comprehensive modules that focused on Leadership Theories and Practices, Futures and Foresights, Social Media, Recruitment, Issues in Policing, Intelligence-Based Policing, Restorative Policing, Ethics, Diversity and Inclusion, and Leadership in Organizations by Armed Forces.

Bossier Sheriff Julian Whittington was excited to see two of his leaders not only graduate from the program, but also excel.  He also recognizes the need for continued training and education.

“You don’t just get leadership skills sitting behind a desk.  Anytime you can go and be around professionals, you can’t help but come back being a better leader,” Sheriff Whittington said.  “This was a phenomenal class, and I was really proud of our top-quality folks and the education that they got through this.

“We teach a lot of things, such as handcuffing and how to test for DWI, but leadership is lifelong and continuing.”

Lt. Rhodes echoed those sentiments.  “Sheriff Whittington understands the fact that leadership is not a skill that’s learned one time,” the West Virginia native said.  “Leadership is a skill that is continually developed in each growth, and that means continuous education.  You cannot stop, you cannot get stagnant.  Otherwise, there’s no growth and development in you as a person but in the organization as a whole.”

“We are very proud to recognize these commanders as our Session #001 graduating class,” said Dr. Anthony H. Normore, President of the National Command & Staff College.  “They exemplify humility, wisdom, good humor, and understanding of effective leadership that lights the way for others to keep going.”

Sheriff Greg Champagne of the St. Charles Parish Sheriff’s Office hosted the final segment of the class and graduation added, “The Command and Staff program is designed to develop star performers for our agencies and the communities we serve.”