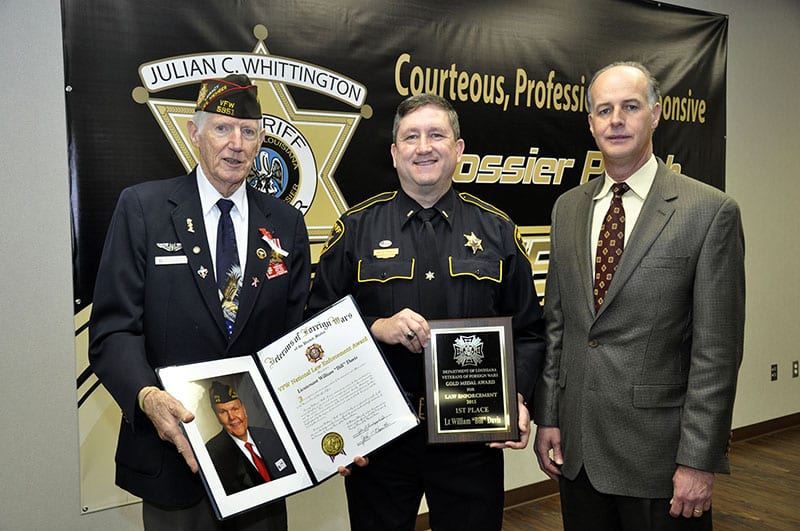 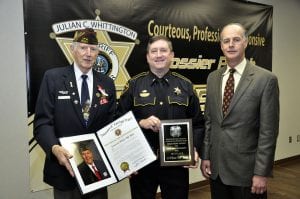 Bossier Sheriff Julian Whittington said one of his deputies has received a top honor this week.

Lt. Bill Davis, Public Information Officer for the Bossier Sheriff’s Office, was recognized at the annual Veterans of Foreign Wars Awards Banquet Saturday in Alexandria, La. He was presented with the VFW National Law Enforcement Award and Department of Louisiana VFW Gold Medal for Law Enforcement 2015.

The six-year veteran of the Bossier Sheriff’s Office was nominated by VFW Post 5951 in Bossier City and went on to win at the district level and emerged over the winners in the eleven other VFW districts to win the statewide title.

The award is given in recognition and sincere appreciation of his dedication and selfless service to the Bossier Sheriff’s Office. The award cites Davis’ outstanding career in which “he has maintained a record of highly professional and exemplary service to the community and the nation. His extraordinary commitment clearly illustrates the proud core values and traditions of the law enforcement profession, further highlighted by the degree of admiration and respect of both his peers and the local public he serves. Lt. William ‘Bill’ Davis is truly an exceptional example of all who wear the badge and this honor reflects the proud ideals and high standards of the Veterans of Foreign Wars of the United States.”

“I count this award from the VFW as huge honor,” said Davis.  “To be recognized by our nation’s heroes who served our country and to be recognized with other first responders here in Louisiana is truly amazing.  I thank VFW Post 5951 and Sheriff Whittington for their support, as well as my wife and my family for their encouragement.   I was blessed that God allowed me to serve my country in the United States Navy; now I am humbled to continue that service in my community at the Bossier Sheriff’s Office.”

Before joining the Bossier Sheriff’s Office, Davis served nearly 21 years in the U.S. Navy as a journalist and public affairs officer. He is a member of various veterans’ and law enforcement organizations and public relations/information groups.  He is a Sunday school teacher and deacon at his church, an instructor at North Louisiana Criminal Justice Academy and the parish representative for the Louisiana Sheriffs’ Pension & Relief Fund.

“I want to congratulate Bill on receiving this prestigious award,” said Sheriff Whittington. “We are truly grateful for his service not only to the community, but our nation as well. He is truly a model of what our residents have come to expect from those in public service.”