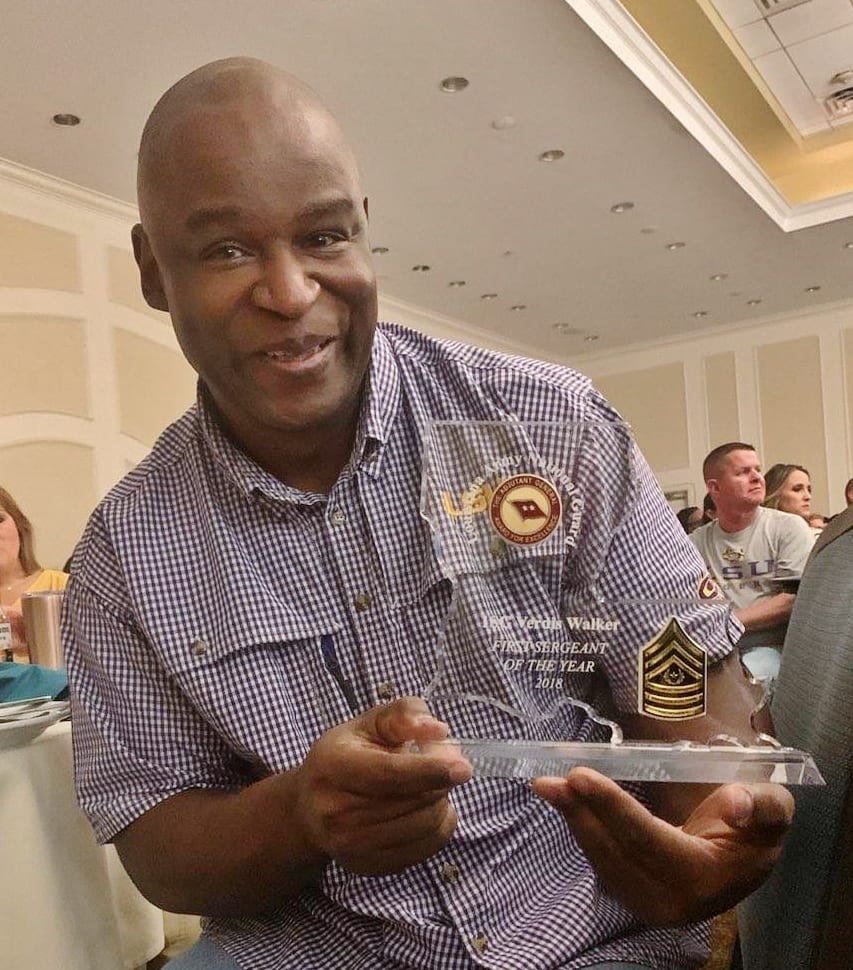 Deputy Verdis Walker, also known as 1st Sgt. Verdis Walker with the Louisiana National Guard, was named First Sergeant of the Year 2018 for the state of Louisiana.   Maj. Gen. Glenn Curtis, Adjutant General for the Louisiana National Guard, presented Walker with the award in front of about 700 attendees at the Noncommissioned Officers Enlisted Convention that Friday evening.  Coach Paul Mainieri, LSU Head Baseball coach, was the guest speaker and the event and also presented him with the award.

“To be nominated is a blessing, and then to receive the award, I was speechless and even got emotional,” said Walker, who just celebrated 30 years of service with the La. National Guard in May.

Walker, a 1984 Haughton High School graduate, enlisted in the La. National Guard on May 25, 1989.  He started out in the Army band here in Bossier City and moved into the Recruit Sustainment Program to help new recruits prepare for basic training.  He deployed to Bagdad, Iraq, with the 39th Military Police out of Camp Minden.  For his service in Iraq, he was awarded the Bronze Star, quite the prestigious honor.

“Everybody I ran into working at the Sheriff’s Office said they enjoyed working here and loved the atmosphere.”  That’s when the 53-year father of two decided to join the ranks of the Bossier Sheriff’s Office.

Sheriff Whittington said hearing of such an honor for Deputy Walker comes as no surprise.

“I am not surprised in the least to hear about Deputy Walker being named First Sergeant of the Year,” gloated Sheriff Whittington.   “I got to know him through his working with us while he was activated with his National Guard duties.  He is a great guy, very professional, and there’s no telling what he’s going to end up doing.”

“He is a valued addition to the Bossier Parish Sheriff’s Office, and in his short time here, he is known to be encouraging, motivated and task driven,” said Asst. Chief Kesha Carr-Evans, Chief of Corrections.

Walker is a proven leader and motivator, having graduated from the U.S. Army’s Sergeant Major Academy in El Paso, Texas, last year.

Walker, father of two sons, is also an avid musician and has taught percussion at C.E. Byrd High School for the past 10 years.  He is currently assigned as the First Sergeant with the 1086th Transportation Program at Bunkie, La., and takes his job of keeping Soldiers trained and disciplined very seriously.

He said that hearing his name called to receive the honor of First Sergeant of the Year for the state of Louisiana was quite an honor. “It made me feel good to know that all the hard work paid off.”

Sheriff Whittington is confident Deputy Walker’s hard work ethic will make him a valuable member of the ranks of the Bossier Sheriff’s Office.  “Oh yeah, we are thankful to have him join our team.”

For Deputy Walker, it’s all good…real good.  “I am super excited about being here; this is a dream job!”