A Bossier City man has been arrested for stealing a safe that had $10,000 in it from a shed at a residence on Highway 2 just east of Plain Dealing during the early morning hours late last week. 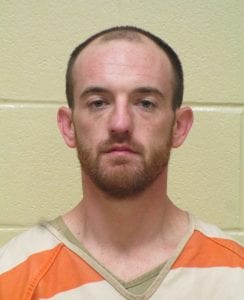 Bradley Dickson, 27, of the 800 block of St. Charles St. in Bossier City, was driving near the 2700 block of Highway 2 in north Bossier Parish around 4 a.m. on Jan. 21 when he ran out of gas.  Dickson told investigators he went to a shed at a nearby residence looking for a gas can, but when he found the safe, he carried that off instead.  Once he got away from the house, he was able to open the safe, and inside, he found approximately $10,000.  He called a taxi and was on his way home…without his car.

When Bossier Sheriff’s Office detectives began their investigation, they noticed the abandoned vehicle near the crime scene that Dickson had been driving.  They determined the owner and made contact with Dickson at his residence.  While they were knocking on the door, Dickson was also knocking…on the wall, punching a hole in it in an attempt to hide the cash.

Back at their offices, detectives questioned Dickson about the crime, and Dickson confessed to stealing the money. Upon executing a search warrant of his residence, investigators found less than $9,000 in the hole in the wall covered in a baseball hat.  Dickson had also gone on a shopping spree and purchased an iPhone 6, case, headphones and accessories for around $1,000, as well as $40 in lottery tickets, in addition to spending $80 on the taxi ride from the crime scene to his residence early that morning.

Dickson also committed an earlier burglary at the neighbor’s residence on Highway 2 when he entered a locked shed and took several items from inside the shed.  He also caused heavy damage to a fence at the residence.

Within 12 hours of stealing the money, detectives transported Dickson to the Bossier Maximum Security Facility in the afternoon of Jan. 21 for booking and charged him with two counts of simple burglary and simple criminal property damage.  His bond is set at $31,000.