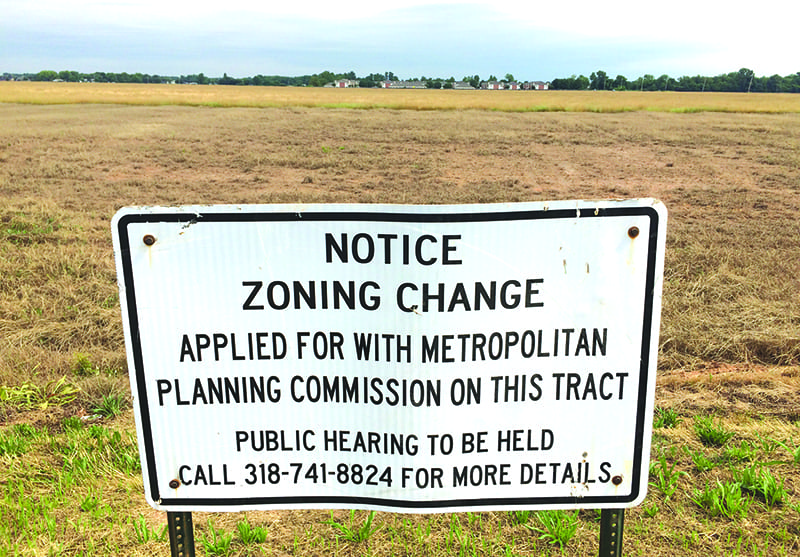 The Bossier City-Parish Metro-politan Commission voted in favor of rezoning the tract of land in north Bossier, paving the way for a new Walmart Supercenter store.
The decision to favor the rezoning of the land at Wemple Road and Airline Drive from Residential/Agriculture (R/A) to B-3, came amidst several compromises and concessions — including widening Wimple Road and installing a school zone — made by the big box retailer to address concerns from outspoken residents living near the proposed development.

Residents had raised several concerns across last month’s MPC meeting and several Bossier City Council meetings. Chief among the concerns were traffic, crime and a decrease in home values.

MPC member Brett Mattison asked if there was a traffic problem now and received an overwhelming “YES!” from homeowners in the room. Opposition spokesperson Kayte Hollowell told the MPC that they “should be concerned with the welfare of the people and the community’s feelings,” to a round of applause from the room.

Renee Sawyer resident/homeowner accused the MPC of “selling out” the residents and being “greedy.” Mattison said “someone would be developing this land if Walmart were not in the picture.”

Sawyer argued residents would be fine with an Ashley Ridge-type upscale development, but not a Walmart Supercenter. MPC members replied that their job is to uphold the ordinances and codes as they pertain to the applicants applying for a zoning change.

Walmart representative Kane LeBlanc of Duplantis Design Group tried to alleviate concerns regarding crime by noting Walmart has reduced crime at its Airline Drive store by 70 percent, due to “extra effort and concentration by Walmart.”

At the start of the meeting, there was a removal of Walmart’s application for 24 hour operation from the agenda. MPC President Art Schuldt, Jr. stated that the Walmart development will not be a 24-hour store, and instead will operate from 6 a.m. to midnight.
LeBlanc said the company had also addressed other residents’ issues since the last meeting, including:

Neel-Schaffer and Associates retained by Walmart for a traffic study.

– $10,000 funding by Walmart will provide $10,000 worth of funding for a school zone on Wemple Road for Providence Classical Academy.

– All truck delivery will be moved off of Wemple Road, access will now be Airline Drive.

– Landscaping issues were addressed with buildings now having an earthtone and appearance “very aesthetically pleasing to the eye.” There will also a proposed landscaping fence around the rear of the store to prevent unsightly boxes, etc. from being in plain view.

– A walking trail with cross connections will be built to alleviate any possible Wemple Road crossing problems. This walking trail was actually already in the process of becoming a reality as a result of plans being implemented by the Bossier Parish Police Jury.

Moreover, Wemple Road will also be widened at the store site. That construction for the widening will be paid for by the City of Bossier City, but Walmart has kicked in $200,000 for road improvements.

Coyle Engineering has been hired by land sellers for a study of drainage on the land and how it affects nearby homes. A detention pond is planned to alleviate drainage issues.
The meeting comes after the City of Bossier City Council voted to annex the 34 acres, all but clearing the way for the new store. The decision was made to protect city tax collections after fears that the Airline Drive store could close, reducing enough funds that would it translate to the elimination of roughly two dozen public safety — police and fire — positions.

Hollowell said that residents believe that Walmart will close its current store on Airline Drive, despite store officials saying they will leave both stores open. MPC member Ben Rauschenbach read aloud a letter from Walmart asserting that they do not plan to close the current Airline store as it is in the top five of all of their Louisiana stores.

Other items concerning various landscaping reviews and other outdoor structures/fixtures on the property development also passed unanimously. The meeting adjourned at 4:55pm after almost three hours.