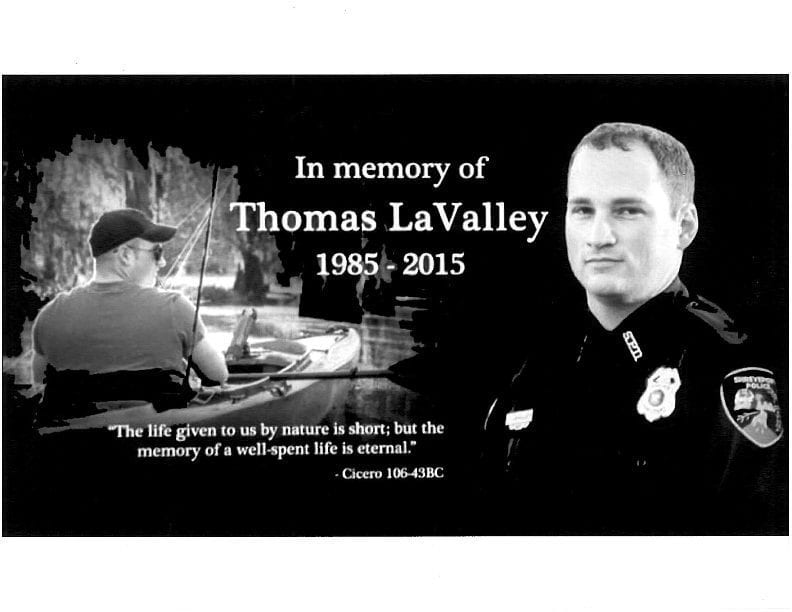 A year after the death of Shreveport Police Officer Thomas LaValley, family and friends are still coming to terms with the sudden loss of his young life.

LaValley was killed in the line of duty Aug. 5, 2015 while responding to a call in Shreveport’s Queensboro neighborhood. LaValley, 29, went into a home and confronted a man inside, ordering him to show his hands. That’s when the man opened fire.

A year later, memorials were held and his friends encouraged others to display random acts of kindness toward law enforcement in his name. Others have arranged ways to memorialize the fallen officer in a more permanent way.

Legislation to name a Bossier Parish bridge in LaValley’s honor was signed by Governor John Bel Edwards in May, declaring the bridge on LA Highway 154 in Bossier Parish as the “Officer Thomas LaValley Memorial Bridge.”

Dist. 9 State Representative Dodie Horton (R-Haughton) filed House Bill 110 to rename the bridge. She carried a photo of LaValley around with her in Baton Rouge during the legislative session.

“I wanted them to see that he was a real person, what he looked like and that he was more than just a name,” Horton said. “He deserves this.”

The bill was approved by a unanimous vote in the House of Representatives and the Senate. It was the first bill Horton, a first time legislator, had passed in the session.

The south end of Lake Bistineau was chosen for this memorial because the bridge crosses an area where LaValley loved to fish. A dedication event and sign unveiling has not yet been announced.

“I never had the opportunity to meet [Thomas], but I know officers like him who put on their uniform every day because they love serving the public,” Horton said. “By honoring him, we are honoring all of our fallen men and women…every mother, father, son, daughter in law enforcement.”