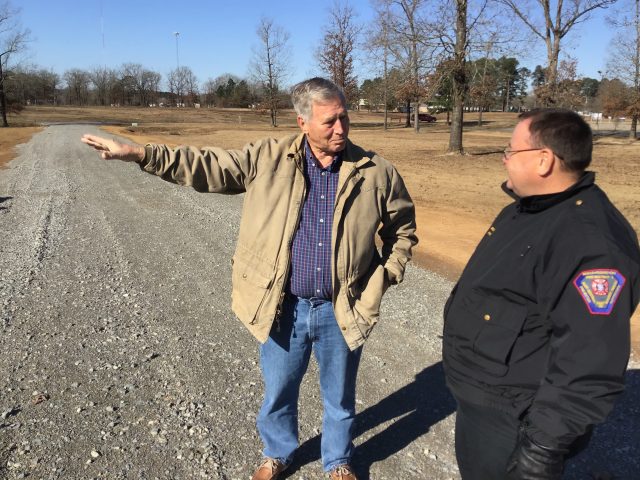 A joint effort between Bossier Parish Fire Dist. 1 and the Bossier Parish Police Jury is expected to go a long way toward helping head off problems both during emergency situations in a local neighborhood and in the case of accidents on U.S. Hwy. 80.

A new cutoff road has been completed that connects Forest Hills Blvd. with Hwy. 80 at the Fire District’s headquarters. Fire Chief Robert Roe said the bypass is going to serve multiple purposes.

“This new road will help us avoid having to get onto Highway 80 heading west and then turn on Forest Hill,” he said. “This allows us to leave our station and go directly to the neighborhood much quicker if we’re responding to an emergency. Saving time could mean saving lives or property.”

Roe said the new road isn’t intended to be used as a shortcut for private vehicles. Plans call for an electronic gate to be installed where the road enters the fire district’s training area and connects with Liberty Hill Dr.

But, the Chief said, motorists could find themselves using the road if an accident occurs at the busy intersection of Hwy. 80 and Forest Hills Blvd.

“If there’s a wreck at that intersection, traffic could be blocked without any means of exit from the neighborhood,” he said. “If that’s the case, we’ll open the gate and allow traffic to exit through the new road. The traffic using the road will be monitored, though.”

While the road was constructed with an eye toward emergency situations, it will serve another purpose in the future. Roe said the road is the first step toward a new District 1 fire headquarters.

“We’re planning to build a new fire station here on the south corner of the new road and Forest Hills Blvd. We’ve got about three acres and we’ve been putting money aside each year to help pay for the facility,” he said. “We’re looking at a cost of around three million dollars.”

Glenn Benton, who represents police jury District 2 (where Fire Dist. 1 is located), said the new road is a project he and his fellow jury members had been hoping to complete for some time.

“This is going to be a real plus for the Forest Hills neighborhood,” Benton said. “We added a right-hand turn lane heading east on Hwy. 80 from Forest Hills to help ease the traffic situation in the mornings and that has helped tremendously. Now, the fire district will be able to respond to any situation much quicker and that’s important.”

Fire District 1 serves roughly 18,000 residents outside the Haughton city limits and along the East 80 corridor and covers an area of roughly 160 square miles. District 1 also provides service for the Camp Minden facilities. Roe said the district responded to just under 2,200 calls for service (mostly medical) in 2021.

“We want to do everything we can to help the fire district personnel and the people they serve,” Benton said.