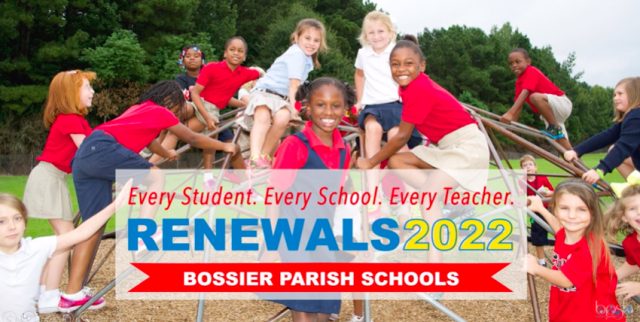 On Thursday, February 17, the Bossier Parish School Board held a Town Hall meeting at the Bossier Instructional Center to discuss the upcoming property tax millage renewals that Bossier Parish voters will be asked to consider on April 30, 2022.

“As was mentioned earlier, the Bossier Chamber of Commerce proudly supports these tax renewals. It’s absolutely critical that we maintain and sustain the great product of this future workforce development that is coming from our Bossier Parish school system,” said Johnson. “This is our education system, this is our future, these are our children. And as representatives of the business community, we support you 100% in these renewals. And, we ask that the public do so as well.”

Following Johnson’s remarks. A Bossier Parish resident approached the podium asking multiple questions. One particular question the resident asked was why programs have not been cut.

“It’s no secret that you guys put these tax renewals in the Spring. When there’s only very few people that come out,” said the Bossier Parish resident.

Bossier Parish Schools Superintendent Mitch Downey replied saying, “The millages were originally funded (or presented) to maintain the salaries of teachers and employees. And, the public has an opportunity every ten years to renew those.However, they were never intended to be done away with at the end of the ten year period.”

“Could you not have less millages. Could you cut it down to five or seven,” asked the Bossier resident.

Listed below is a breakdown of the propositions:

Proposition 1 funds a portion of the existing salaries and benefits earned by BPSB’s nearly 2,900 educators and support personnel. These employees include paraprofessionals, School Resource Officers, librarians, bus drivers, secretaries and other personnel that support student learning.

Proposition 2 funds the day-to-day operations and maintenance of BPSB’s 45 schools and facilities (which range from new construction to schools that are nearly 100-years-old). The majority of the schools in the school system were built during the baby boom era of the 1960’s and 1970’s. Thus, these schools are 50 to 60-years-old.

This millage also pays to keep the lights on. It pays for utilities, as well as the existing salaries and benefits earned by maintenance staff.

(The maintenance department has been operating on the same budget for the last 14 years, despite adding new schools and school wings).

Every penny of Proposition 3 goes toward paying teacher salaries and benefits.