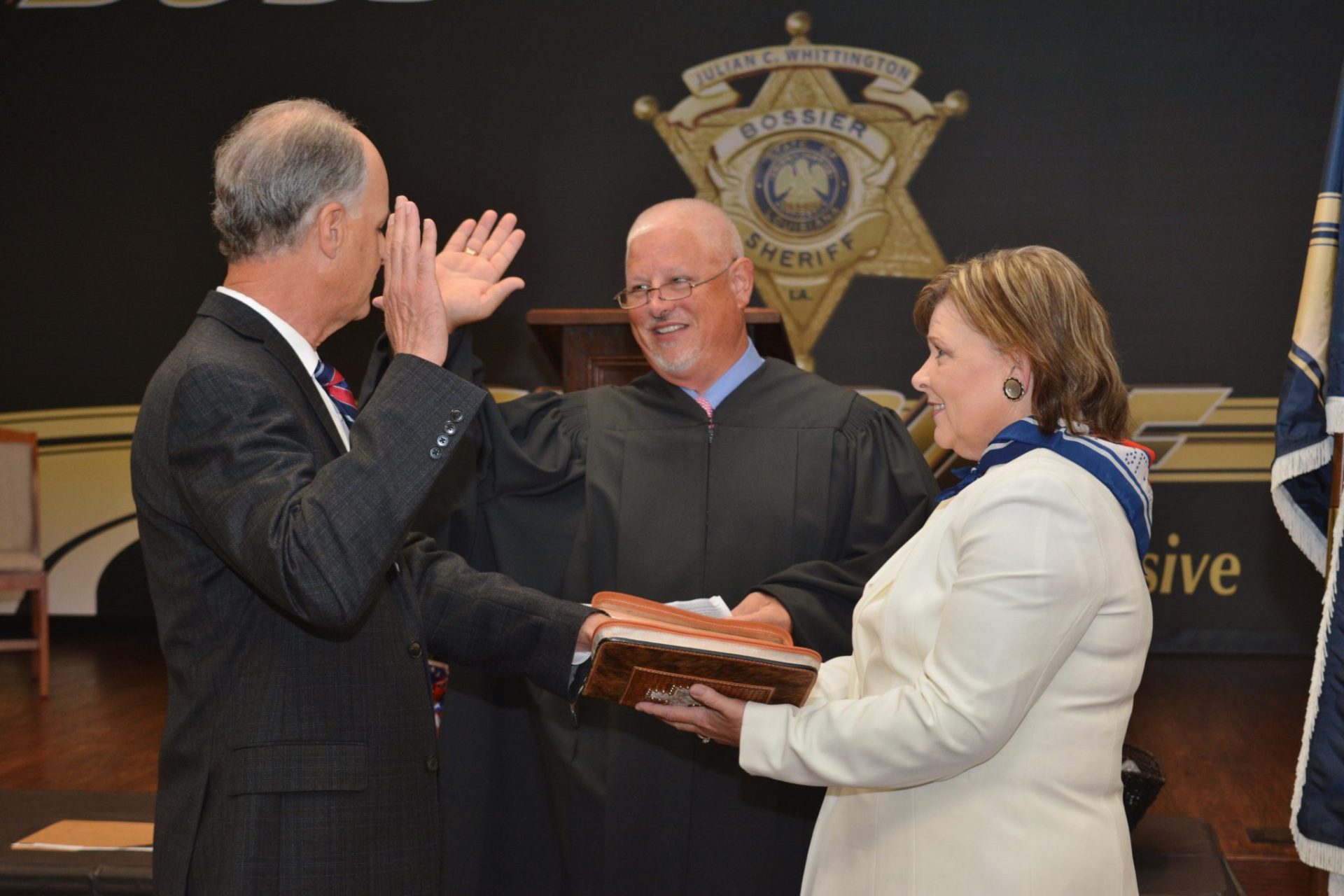 Bossier Sheriff Julian Whittington made it official today as he was administered the oath of office as Sheriff of Bossier Parish by the Honorable Judge Jeff Cox, Louisiana Court of Appeal for the Second Circuit, at the Viking Drive Substation Tuesday morning.

Sheriff Whittington was joined by his wife, Melissa, who held the family Bible, which she says “has seen us through every battle and celebration we’ve ever had.” About three dozen Bossier deputies and staff members also attended the ceremony.

“After 32 years, you want to say you’ve seen it all, but obviously that’s not the case,” exclaimed Sheriff Whittington, who will begin his third term as sheriff on July. He first took office in July 2012.

“Thirty-two years in law enforcement, eight as sheriff, and starting another term, the challenges just keeping getting bigger. A lot of things we’re seeing now I would have never dreamed 32 years ago we’d even be talking about it, much less concerned about it.”

But Sheriff Whittington acknowledges that those challenges are some of the reasons men and women serve in law enforcement, in order to protect and serve.

While the spotlight was on him today and his oath of office, Sheriff Whittington quickly diverts attention to the hard-working deputies, staff, Posse, Ladies Auxiliary and Reserve deputies who are committed to serving this parish.

“I have the easy part of doing a few news conferences and signing a few checks,” he said. “The people who serve at the Bossier Sheriff’s Office 24-7, 365, in the rain, at night, it doesn’t matter…they’re out there to serve the people.”

The sheriff was also quick to praise the residents the Bossier Sheriff’s Office serves, saying, “People have the trust and confidence in us, which we know is crucial. We cannot function, and we cannot do our job without that trust.”

That trust is under attack, he says. But goodness will prevail, he emphasizes.

“There are a lot of people trying to destroy that trust,” Sheriff Whittington said. “It’s dangerous what we are facing. But with the good people in the Sheriff’s Office and in our community, I’m optimistic that we are going to come through this just fine.”

Sheriff Whittington credits that optimism and his more than three decades of service in law enforcement to his family support and God’s involvement in his life.

“It takes all of us to get us through this, and I was honored to have my wife, Melissa, here. Having Judge Cox is always a pleasure.”

Sheriff Whittington also swore in Chief Deputy Duane Huddleston to continue to serve as his top deputy at the Bossier Sheriff’s Office.

At the end of the ceremony, Sheriff Whittington passed out new commissioning cards to deputies and identification cards to staff members.